Samsung Electronics' "The Wall," the first MicroLED TV, and the rollable display from LG Display stood out the most, being selected for recommendation by most of the media. 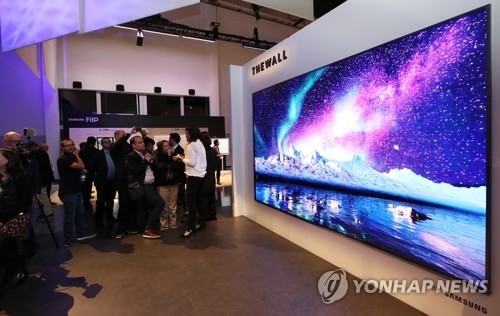 The Wall was named by U.S. broadcaster CNN as one of the three TVs "that could change how you watch movies. While these TVs may not be available right now, they point to what might come in the future, CNN said, quoting Patrick Moorhead, president of tech analysis firm Moor Insight & Strategy.

The Wall Street Journal web edition highlighted the two products as well, picking them as among the best of CES 2018. LG's rollable display answers to consumers' wishes for the TV to disappear when not being used, it said.

CNET recommended the two products as the "Gorgeous TVs of CES 2018," while TechRadar gave its Best in Show award to Samsung's The Wall TV. LG's rollable display got the "Must See Award."

"Self-driving cars and artificial intelligence received bigger attention than traditional home appliances at this year's CES," a South Korean IT industry official said. "But the general reaction by foreign media is that Samsung and LG dominated other global companies in the TV and display sectors, which are the cores of CES."