During his visit to the State Academy of Sciences, Kim toured the history and science exhibition rooms there before saying they are "a treasure house" and "the birth place" of self-reliance and self-development, according to the state-run Korean Central News Agency (KCNA).

North Korea has staked its destiny on science and technology so that it was possible for the country to advance "the Korean revolution" despite stern ordeals and strengthen its strategic position considerably, Kim was also quoted as saying, apparently in reference to the country's nuclear weapons development.

"Thanks to the foundation of self-supporting national economy, scientific and technical forces trained with our own efforts and their clear heads, there are no difficulties insurmountable for us despite the enemies' sanctions of 10 years or for 100 years," Kim said.

He also expressed expectations for the academy's scientists to make a tangible contribution to building a prosperous and powerful country and sent "warm greetings" to all the scientists and technicians across the country, the KCNA said.

It was Kim's first reported public appearance since he delivered his New Year address where he offered to join the 2018 PyeongChang Winter Olympics and talk to South Korea over the participation. 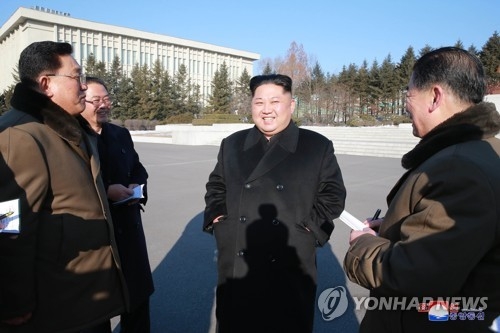