JEJU ISLAND/SEOUL, Jan. 12 (Yonhap) -- The airport on the country's resort island of Jeju resumed operations and began transporting over 7,000 passengers who have been stranded after a series of shutdowns caused by heavy snowfall the previous day, the government said.

The first flight bound for Gimpo, in western Seoul, took off from Jeju International Airport at 7:30 a.m., after the airport partially completed shoveling the snow and ice from the airstrips early in the morning, according to the Ministry of Land, Infrastructure and Transport.

While operations have resumed, some flights will be delayed as the airport continues with the snow removal work, the ministry added.

A total over 7,047 passengers were unable to leave Jeju following a blizzard and cold weather that affected the southern part of South Korea. 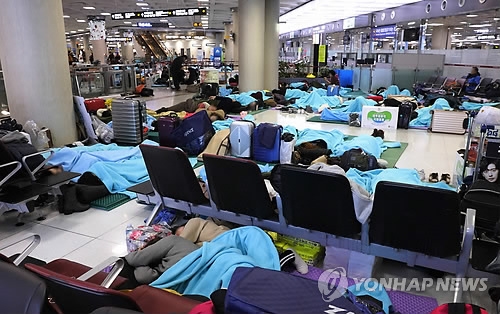