SEOUL, Jan. 12 (Yonhap) -- U.S. President Donald Trump hinted that he has developed a "good relationship" with North Korea's leader in an interview Thursday with a foreign media outlet, raising expectations that he could pursue more diplomacy in dealing with Pyongyang's nuclear and missile threats.

"I probably have a very good relationship with Kim Jong-un," Trump said in an interview with the Wall Street Journal (WSJ). "I have relationships with people. I think you people are surprised." 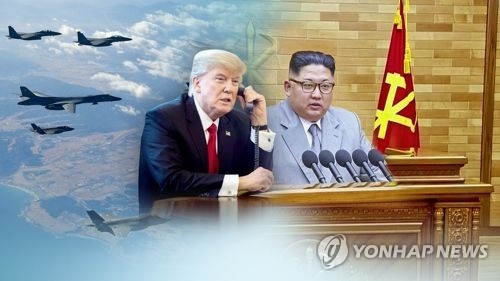 His remarks came after senior officials of South Korea and North Korea held their first formal talks on Tuesday in more than two years to discuss Pyongyang's participation in the Winter Olympics to be held next month in the South.

A guarded optimism is rising here that the latest inter-Korean dialogue could reduce tensions and create a mood for talks on the North's nuclear and missile program.

In a telephone conversation with South Korean President Moon Jae-in on Wednesday, Trump welcomed the resumption of talks, saying his country may hold a dialogue with the communist state when the timing and conditions are right.

His conciliatory tone contrasts with last year when Trump frequently exchanged bellicose rhetoric and even insults with Kim, mentioning that all options including military action are on the table. Trump called the North Korean leader a "maniac" and mocked him as "rocket man."

In his interview with the WSJ, Trump said those comments are part of a broader strategy.

"You'll see that a lot with me ... and then all of the sudden somebody's my best friend. I could give you 20 examples," he said.

The WSJ said Trump praised China's support for global efforts to put more pressure on the North to give up its nuclear weapons program but called for more cooperation, saying "they can do much more."
(END)