Blood tests on the infants showed that all of them were infected with Citrobacter freundii, which can cause fatal symptoms in immunocompromised patients, including premature babies, the Seoul Metropolitan Police Agency said, quoting the final autopsy result from the National Forensic Service (NFS).

Police said they will charge five medical staff at the Ewha Womans University Hospital, including the chief doctor and nurse who had been in charge, with involuntary manslaughter for neglecting their duties, resulting in the babies' deaths.

On Dec. 16, four premature babies died within a two-hour period while being treated at the hospital in western Seoul. Preliminary postmortems raised the possibility that they might have been infected by the same type of bacteria.

The NFS said that injections of nutritional supplements for the babies were either originally contaminated or became contaminated while being opened and connected to intravenous tubes.

"It is rare that deaths by a bacterial infection all come at about the same time," the NFS said. "Based on the fact that all the infants showed a drastic change in their heartbeats and bloated bellies, it is likely that they were infected around the same time, resulting in similar developments." 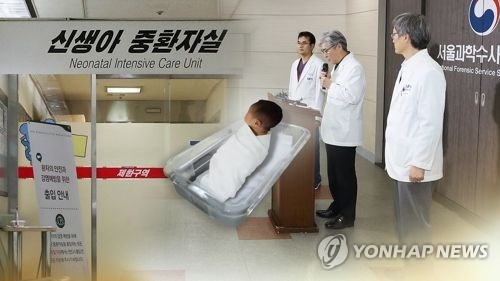