SEOUL, Jan. 12 (Yonhap) -- President Moon Jae-in's approval rating rose for the second consecutive week, a poll showed Friday, possibly boosted by talks with North Korea that the president said could signal a resumption of negotiations to rid the North of its nuclear weapons.

Moon's approval rating came to 73 percent in a survey conducted by Gallup Korea, up 1 percentage point from a week earlier. The weekly poll was conducted on 1,006 adults from Tuesday through Thursday, with a margin of error of 3.1 percentage points. 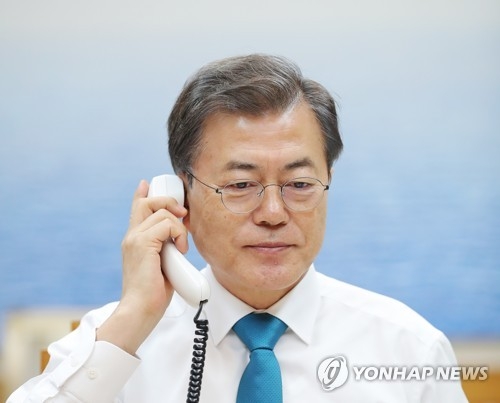 The talks were mostly aimed at discussing North Korea's participation in the Winter Olympic Games, which will be held in PyeongChang, South Korea, from Feb. 9-25, but also provided a rare opportunity to discuss ways to improve relations between the two Koreas.

Seoul and Pyongyang have reopened a military hotline and have agreed to resume cross-border talks in other areas.

In phone conversations with U.S. President Donald Trump and Chinese President Xi Jinping earlier this week, Moon said talks between the two Koreas may help establish peace on the Korean Peninsula, while also ensuring the success of the Winter Olympics.

The leaders agreed that inter-Korean dialogue may lead to the resumption of talks on ending North Korea's nuclear program, the presidential office Cheong Wa Dae said.

Despite an increase in Moon's approval rating, that of the ruling Democratic Party dropped 2 percentage points to 46 percent, according to the local pollster.