WASHINGTON, Jan. 11 (Yonhap) -- South Korea and the United States are in talks over how to develop ties with North Korea in the wake of the regime's recent overture leading to the first dialogue in two years, Seoul's top negotiator on the North's nuclear issue said Thursday.

Lee Do-hoon, special representative for Korean Peninsula peace and security affairs, arrived in Washington on Wednesday to brief U.S. officials about the results of the high-level inter-Korean talks that took place a day earlier.

The meeting came less than two weeks after North Korean leader Kim Jong-un expressed a willingness to hold inter-Korean talks on his country's possible participation in the PyeongChang Winter Olympics.

It also took place against the backdrop of sharply escalating tensions over Pyongyang's nuclear and ballistic missile programs. 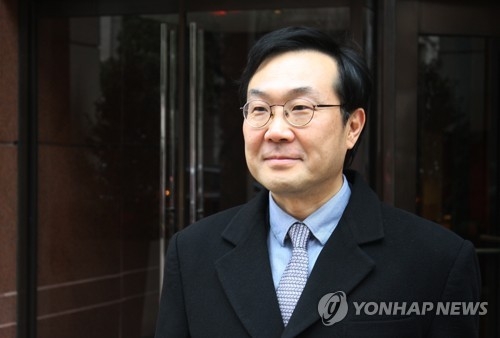 "I explained the results of the South-North high-level talks to the U.S. side, and they expressed their understanding and support," Lee told reporters here. "We talked about ways to develop South-North and North-U.S. ties, and based on our coordination with the U.S., we plan to move on to the next stage."

Seoul hopes the inter-Korean talks will pave the way for Washington and Pyongyang to sit down and discuss the dismantling of the regime's nuclear and missile programs. In recent days, U.S. President Donald Trump has also indicated a growing willingness to hold talks with the North.

"Coordination between South Korea and the U.S. becomes ever more important during serious times," Lee said. "Thankfully, our coordination has recently been ideally smooth."

Among those Lee has met are Joseph Yun, the U.S. special representative for North Korea policy, and Matthew Pottinger, the senior director for Asian affairs on the White House National Security Council. On Friday, the envoy plans to meet with Susan Thornton, the U.S. assistant secretary of state for East Asian and Pacific affairs.

Separately, a senior South Korean government official noted that the North Korean regime will have no choice but to hold talks with the U.S. as long as it pursues its "byongjin" policy of simultaneously developing its nuclear force and economy.

"Unless it takes steps to resolve the mounting sanctions against it, it will be impossible to develop the economy," he said on the condition of anonymity.

On the U.S. side, he said the Trump administration has lowered the bar for dialogue, demanding only that the North stop its nuclear and ballistic missile testing.