SEOUL, Jan. 12 (Yonhap) -- A lower court acquitted a veteran opposition politician on Friday of slandering former President Park Geun-hye with allegations about her ties to a scandal-ridden lobbyist.

The Seoul Central District Court handed down a not-guilty verdict to Rep. Park Jie-won of the minor opposition People's Party.

The four-term lawmaker was indicted in August 2014 for making false remarks in 2012 that the former president, who was then a lawmaker and a presidential hopeful, was close to Park Tae-gyu, who was under investigation for illicit lobbying for officials involved in a massive corruption scandal at local savings banks.

The court said that the remarks were about an issue of public interest and it is difficult to see that he had known the allegation was not true.

It also accepted the defendant's argument that Rep. Park made the statement to urge a swift investigation into the scandal rather than to defame Park Geun-hye, a strong presidential candidate at the time.

Following the court ruling, Park, 76, told reporters that the verdict was expected as he made the statement based on what he had heard from reporters and other fellow politicians.

In 2014, the lawmaker was also charged with slandering Park Geun-hye's younger brother Ji-man and her former secretary Chung Yoon-hoe. He said in a magazine interview that the two men and another Park aide Lee Jae-man are interfering with state affairs.

But the charges were later withdrawn after Park Ji-man and Chung submitted a letter to the court saying that they did not want to pursue the case.

"If the prosecution had investigated them back then instead of me, none of the influence-peddling scandal would have happened, nor would Park have ever needed to be in prison for that matter," the lawmaker told reporters leaving the courthouse.

The former president was removed from office in March last year over a massive corruption scandal involving her longtime and confidante Choi Soon-sil, Chung's ex-wife. 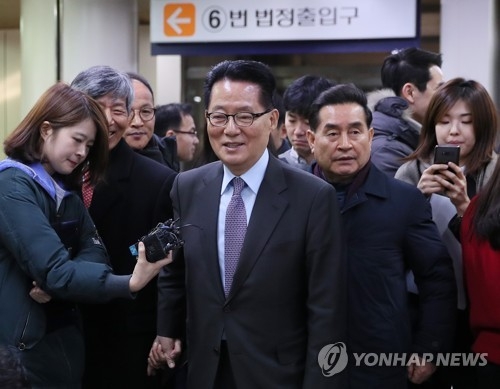