On Friday, vice minister-level officials of the finance ministry, the justice ministry and other related agencies held a meeting to discuss measures to curb virtual currency speculation. But the government provided no details of the meeting over concern it could impact the market.

"As Cheong Wa Dae and the Justice Ministry have been poking around it, the cryptocurrency market that has been operating normally has turned into a roller coaster," Kim Sung-tae, the floor leader of the main opposition party, said during a party meeting. 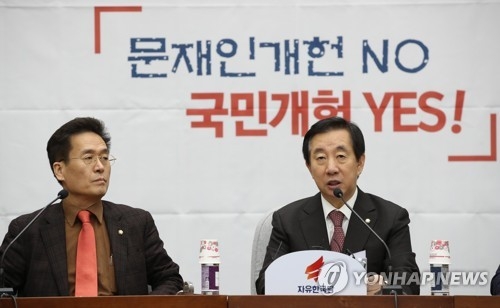 The ruling party is taking a measured approach to the issue.

"We're in a situation where we have to consider both the industrial side of the issue, meaning developing virtual currencies as an important basis for the fourth industrial revolution ... and the tasks we're currently facing," such as bringing speculation under control, said Woo Won-shi, floor leader of the ruling party.

It's important to find an appropriate point between "promotion and regulation," he said.

"We will make a decision after various discussions, including government-party consultations," Woo said.

Rep. Park Young-sun of the party told a radio interview that she believes the justice minister has gone too far in talking about shutting down cryptocurrency exchanges.

"A wiser policy would be to have exchanges operate after government verification or find ways to differentiate speculative and non-speculative funds in the course of taxation," Park said.

But other members of the party said closing exchanges is the right decision.

"I think scrapping exchanges is the right way," a lawmaker said on condition of anonymity. "If ordinary people start gradually joining (in cryptocurrency trading) out of curiosity, the situation may spiral out of control."