(ATTN: ADDS details on meeting to be held in Canada next week in 8th para)

SEOUL, Jan. 12 (Yonhap) -- The top diplomats of South Korea and the United States had a phone conversation Friday to discuss the outcome of recent inter-Korean talks and ways to strengthen their coordination on major issues of mutual concern, the foreign ministry here said.

In the conversation with U.S. Secretary of State Rex Tillerson earlier in the day, Foreign Minister Kang Kyung-wha reaffirmed that South Korea will seek to improve ties with the North simultaneously with efforts to resolve the current nuclear stalemate, according to the ministry. 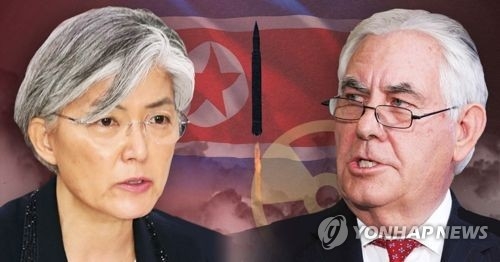 They also exchanged views on the outcome of the talks held Tuesday between South and North Korea at the truce village of Panmunjom.

Kang thanked the U.S. for maintaining its principle of denuclearization of the Korean Peninsula, which she said helped lead to the first formal talks between the two Koreas since 2015.

Tillerson said that it is "encouraging" for the Koreas to resume talks and called for close coordination in mapping out follow-up measures.

The two promised to meet on the sidelines of a gathering to be held in Canada next week to further discuss cooperation, the ministry said.

The Canada meeting scheduled for Tuesday will bring together ministers from countries which fought alongside South Korea during the 1950-53 Korean War.

Kang is looking to hold bilateral discussions with representatives from major countries on the sidelines of the gathering in Vancouver, the ministry said.