SEOUL, Jan. 12 (Yonhap) -- Prosecutors said Friday they raided the residences of three former aides to ex-President Lee Myung-bak as part of a probe into allegations that they accepted bribes from the National Intelligence Service (NIS) between 2008 and 2012. 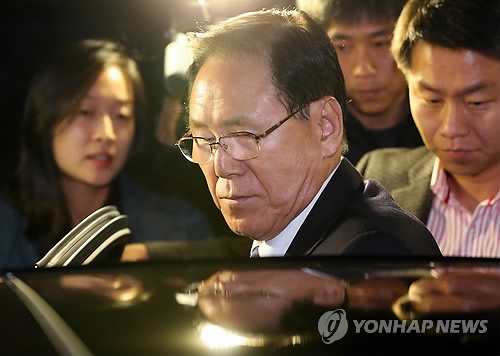 They are accused of taking kickbacks from the state spy agency while they worked for the president. The prosecution declined to provide a figure for the amount of the bribes suspected, saying the investigation is still ongoing.

Kim Paik-joon, 78, is known to be so close to the former president that he has been dubbed "Lee's butler." The other two Kims also served at Lee's side between 2008 and 2012.

Prosecutors said fresh suspicions about the three former officials arose from the ongoing bribery case involving former NIS director Won Sei-hoon, who is under presentencing detention and on trial for engaging in various illegal political maneuvers.

They have reasons to believe that some of the NIS funds were offered to the three former aides on account of Won, they said.

The probe is also part of a broader high-profile investigation underway over the alleged illicit payments by the then NIS chiefs to Cheong Wa Dae under the two previous conservative governments.

The prosecution has additionally indicted ousted and jailed leader Park Geun-hye for taking 3.65 billion won (US$3.43 million) from the NIS. Two of her aides are also standing trial over the same charge.