He attended a ceremony marking the construction of a second passenger terminal at Incheon International Airport, the nation's main gateway south of Seoul.

"Incheon airport must go beyond Northeast Asia and become a global hub. It must attract more passengers with attractive tour products and creative services. The government will actively support expanding its facilities so Incheon airport can annually process up to 100 million visitors by 2023," he said.

The second terminal is set to officially open next week, expanding the airport's capacity to 72 million from the current 62 million passengers per year. 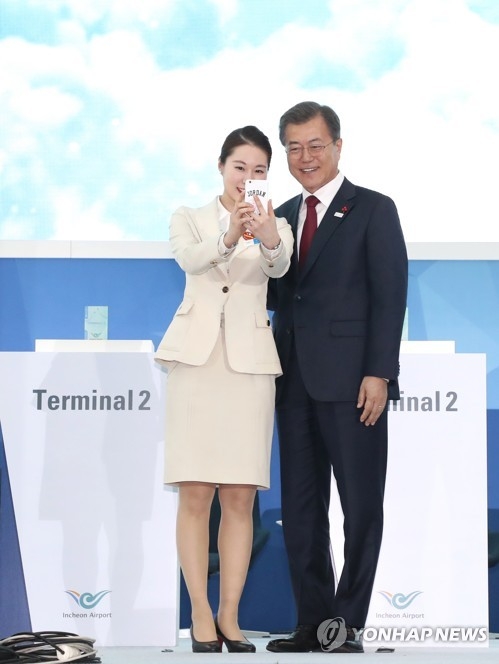 "But we must not settle down here. Now we must begin preparations for an era of 20 million foreign tourists," Moon told the ceremony.

Around 13 million foreigners are estimated to have visited the country last year, a significant drop from nearly 17 million in 2016. Such a decrease was apparently caused by a sharp drop in the number of Chinese tourists to the country amid a Chinese protest against the deployment of U.S. missile defense system THAAD in South Korea. In the first 11 months of last year, the number of Chinese visitors to South Korea came to less than 3.3 million. In 2016, more than 7.8 million Chinese tourists visited South Korea, according to data from the state-run Korea Tourism Organization.

The president noted the number of passengers at the Incheon airport will continue to increase on a rise in the number of South Koreans going abroad.

Moon also urged efforts to enhance the airport's competitiveness in the air cargo sector, noting the airport already accounted for 99 percent of air cargo to and from the country.