SEOUL, Jan. 12 (Yonhap) -- South Korea's Paralympic committee said Friday it is preparing to invite North Korea to the PyeongChang Winter Paralympics, which are slated for March, amid hope of inter-Korean reconciliation through sporting events.

During the first official talks between the two Koreas in more than two years, North Korea said earlier this week that it plans to send a delegation of athletes to the PyeongChang Winter Olympics, also raising the possibility that the North could join the Paralympic Games in March.

The Winter Paralympics run from March 9 to 18, following the Feb. 9-25 Winter Olympics.

The event will take place in PyeongChang, an alpine town located 180 kilometers east of Seoul, as well as nearby sub-host cities.

The official said if North Korea participates in the World Para Nordic Skiing World Cup, which kicks off in Germany later this month, and asks the IPC for wild-card entries, Pyongyang can participate in the 2018 Paralympics.

"The IPC is enthusiastic about North Korea's participation, so there should be no hurdles," the official added.

It would be the first time for North Korea to participate in a Winter Paralympics. Pyongyang sent a team of two athletes to the 2016 Rio Summer Paralympics, but has never participated in a winter edition.

The Korean Paralympic Committee also plans to prepare for a joint march of the two Koreas at the opening ceremony of the Paralympics. 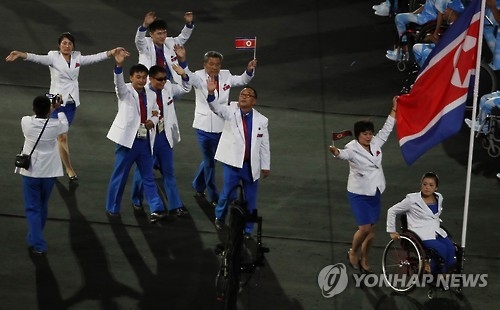