MIRYANG, South Korea, Jan. 26 (Yonhap) -- Thirty-three people were killed and 79 others injured in a hospital fire in the southeastern city of Miryang early Friday, with the number of casualties likely to rise further, firefighters said.

The fire is suspected to have started at around 7:30 a.m. in the emergency room on the first floor of Sejong Hospital in the city, about 380 kilometers southeast of Seoul, according to the authorities. The fire did not spread to other floors and was put out in about three hours, they said.

The 33 victims, whose identities were not immediately known, appear to have died from inhaling toxic gas, the firefighters said. Nine people were seriously wounded, while 70 others sustained light injuries.

A total of 111 patients and hospital staff were transfered to six nearby hospitals, and 94 patients from the nursing home adjoined to the main building evacuated unhurt, they said. 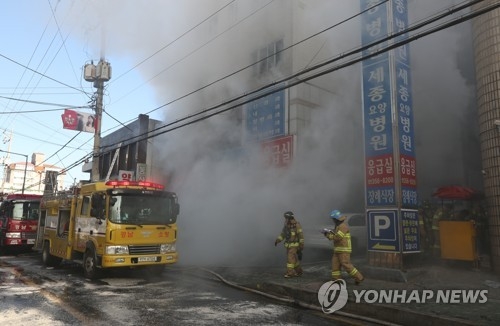