SEOUL, Jan. 30 (Yonhap) -- Calls are mounting on Tuesday for an investigation into a sexual harassment claim by a female prosecutor against a former senior justice ministry official.

Seo Ji-hyeon, a public prosecutor at the Tongyoung branch of the Changwon District Prosecutors' Office, insisted that she was unfairly moved to another post because of the complaint.

Seo made the revelation on the prosecution's internal board online Monday. She accused an ex-senior prosecutor, who had been dispatched to the Ministry of Justice, of groping her body at a funeral in 2010.

She also claims that the then chief of the ministry's criminal affairs bureau tried to cover it up and later she was transferred to an unwanted post in the regional office in 2015. She said the appointment came after she was given a disciplinary warning for her regular performance assessment, which she still finds unconvincing.

Seo appeared on a prime time cable TV news program late Monday, recounting the past eight years of agony and regrets she had to live with and that she decided to come forward to make things right.

Calls for a probe have been growing since her revelation. An online petition has been filed with the presidential office Cheong Wa Dae, with thousands of citizens signing up to call for a swift launch of a fair investigation into the allegations.

Prosecutor-General Moon Moo-il told reporters early Tuesday that he will do everything in his power to uncover the truth and hold those responsible for their wrongful actions.

The alleged offender turned out to be Ahn Tae-geun, who was sacked by the justice ministry in June last year for what's known as a "cash scandal." Two senior prosecutors, including Ahn, were dismissed from their posts and charged for giving money to his subordinates at a private dinner earlier in the year.

The ministry's then criminal bureau chief accused of covering it up is incumbent lawmaker Choi Gyo-il of the main opposition Liberty Korea Party.

Following the revelation, Ahn told media that he apologizes for "things that may have happened," but he does not remember because he was intoxicated at the time and it happened a long time ago. Choi has denied any involvement in Seo's appointment or alleged cover-up.

The justice ministry released a statement to media late Monday. It said there was no flaw in the appointment procedure and it is difficult to grasp circumstances given the eight-year lapse and that the persons of interest no longer belong to the office. 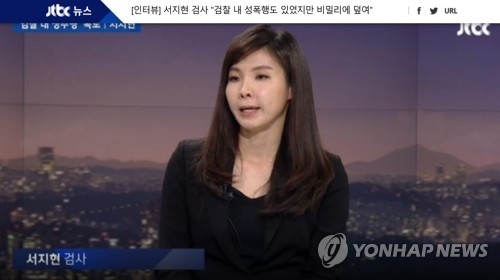