SEOUL, Feb. 7 (Yonhap) -- North Korea has offered to send the younger sister of leader Kim Jong-un as a member of its high-level delegation for the PyeongChang Winter Olympics, Seoul officials said Wednesday.

The North informed the South that Kim Yo-jong, a key official in the ruling Workers' Party of Korea (WPK)'s central commitee, will be included in the delegation to be led by ceremonial head of state Kim Yong-nam, according to South Korea's unification ministry.

It would be the first time that a member of the Kim family that has ruled the regime for three generations comes to the South. 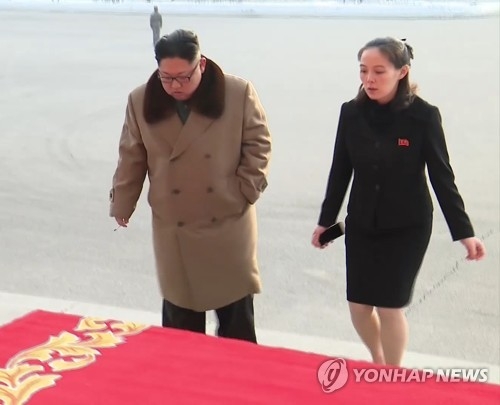 The team also includes Choe Hwi, the chairman of the National Sports Guidance Committee, and Ri Son-gwon, the head of the North's state agency in charge of inter-Korean affairs.

"The government views the composition of the delegation -- party, government and sports officials -- as meaningful, given that their trip is aimed at celebrating the opening ceremony of the Winter Games," the ministry said.

It said that Kim was apparently included because foreign leaders' families are customarily sent to deliver congratulations on the games.

The two Koreas have engaged in a flurry of sports diplomacy since the North Korean leader extended a rare olive branch to Seoul in his New Year's message, after years of tensions sparked by the North's nuclear and missile provocations.
The wayward regime declared last year that it had completed its nuclear programs following its most powerful sixth nuclear test and launches of three intercontinental ballistic missiles (ICBMs).

Kim Yo-jong's title was officially confirmed by the North as the No. 2 post in a party department presumed to be the propaganda and agitation unit.

She was named an alternate member of the party's politburo, the top decision-making body, at the party's key meeting in October 2017. The move appears intended to further tighten the Kim family's control over the country.

Experts said that North Korea appears intent on using the PyeongChang Games to ease its diplomatic isolation and eventually weaken international sanctions over its nuclear and missile programs.

They predicted that Kim Yo-jong may deliver a message from her brother regarding inter-Korean ties and North Korea's nuclear programs.

"The dispatch of Kim clearly indicates that the North wants to improve its relations with the South," said Park Won-gon, a professor at Handong Global University. "It also can be interpreted as a peace offensive to show that it is can play a role as a normal state, even with nuclear weapons."

Cheong Seong-chang, a senior research fellow at the Sejong Institute, said that Kim Jong-un appears to be trying to show that he is sincere in his wish to enhance inter-Korean ties and sound out the possibility of cooperation with the South.

"Her trip will greatly help President Moon Jae-in push for a summit with the North's ruler for candid dialogue," Cheong said.

Liberal President Moon voiced hope that better inter-Korean relations will pave the way for the resolution of the North Korean nuclear issue and for a broader dialogue between the United States and the North.

Analysts also said that the North may have calculated a plan by Ivanka Trump, the daughter of U.S. President Donald Trump, to visit the South to attend the closing ceremony of the Olympics.

"North Korea might see the need to break the current stalemate amid stringent sanctions," said Kim Yeon-chul, a professor at Inje University.

The inclusion of Choe Hwi, who is under U.N. Security Council (UNSC) sanctions, could create a headache for the South, as his visit could violate international sanctions, which involve travel bans and an asset freeze.

He was Kim's predecessor as the first vice director at the propaganda department which controls the public and the media.

Kim Yo-jong is targeted by U.S. sanctions on North Korea's human rights abuses along with Choi, but not on the UNSC blacklist.

"The government will consult with the international community to ensure (the visit causes) no controversy over sanctions," said a ministry official.

The South's preparation for the North's participation in the games has been limited by multilayered sanctions.

"It is quite worrisome that the dispatch of Choe may be intended to use the Winter Games as a venue for the country's propaganda, not as the one for genuine dialogue," said Shin Beom-chul, a professor at the Korea National Diplomatic Academy. 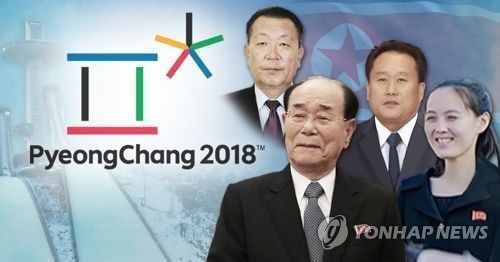