SEOUL/GANGNEUNG, South Korea, Feb. 10 (Yonhap) -- Kim Yo-jong, North Korean leader Kim Jong-un's sister, said Seoul felt familiar even though it was her first-ever visit to the South, at an official dinner Saturday, according to a pool report.

"It doesn't feel unfamiliar," she replied when Choi Moon-soon, governor of Gangwon Province, asked her how she felt about Seoul.

Wearing a wine-colored jacket and black pants, Kim attended the dinner held at a hotel in Gangneung, the sub-host city of the Olympics. It was hosted by Unification Minister Cho Myoung-gyon for North Korea's high-level delegation.

North Korea's ceremonial head of state Kim Yong-nam, Choe Hwi, the chairman of the National Sports Guidance Committee, and Ri Son-gwon, the head of the North's state agency in charge of inter-Korean affairs, were also in attendance.

Kim Yong-nam celebrated the South's hosting of the Winter Games.

"As the Olympics were opened successfully with applause from North and South Korea, we believe that the games will pave the way for the two sides' reconciliation, and stronger inter-Korean ties, and furthermore for Koreans' unity and unification," Kim said. 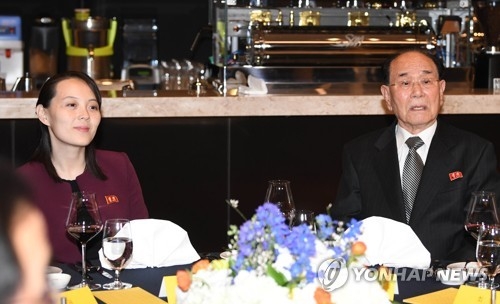 The delegation arrived in South Korea Friday for a three-day visit to attend the opening ceremony of the Winter Games.

Earlier in the day, Kim Yo-jong, as the North ruler's special envoy, delivered his letter to President Moon Jae-in, which includes an invitation of the South's leader to Pyongyang at an early date.

The two Koreas have engaged in a flurry of sports diplomacy after North Korean leader Kim Jong-un extended a rare olive branch to Seoul in his New Year's message.

Governor Choi told reporters that the North's delegation expressed hope that inter-Korean relations can move forward at a faster pace.

After the dinner, the North's delegation headed for Kwandong Hockey Center in Gangneung to watch the unified Korean female ice hockey team's first game at the Olympics, according to an official at Seoul's unification ministry.