In the event's finals at the Gangneung Oval, Lee clocked in at 37.33, 0.39 second behind winner Nao Kodaira of Japan, who broke Lee's Olympic record of 37.28.

The bronze medal went to Karolina Erbanova of the Czech Republic, who finished at 37.34.

The two-time gold medalist Lee was vying for her third Olympic title at PyeongChang but finished second in her last Olympic race. 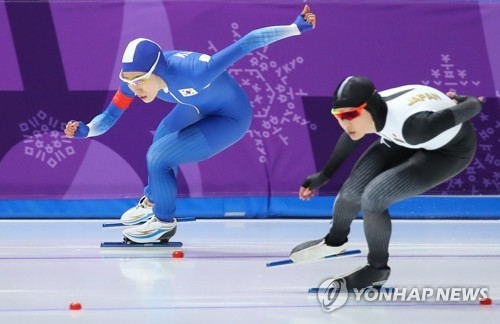 Lee raced in the outside lane with Arisa Go in the 15th group. She sprinted the first 100m in 10.20, faster than Kodaira, who finished the race with a new Olympic record, just ahead of Lee.

But she slowed down to race the remaining 400m in 27.13 seconds, putting her name right behind Kodaira on the leaderboard. She flinched slightly in the last corner.

She said she is satisfied with the result even though she failed to meet her own goal of 36.80.

For her, it was more comfortable to come to the Olympics as an underdog, not as a title defender.

"Actually, I felt pressure a bit to defend my title again," she said. "In the past, I was worried about falling from the top. But this time, she is the top dog, not me."

After all 31 skaters finished their races, the 28-year old skater shared a hug with the gold medal winner, who has become her friend due to their years of rivalry.

The skater said she respects Kodaira, who is 31 and participated in three different distances at PyeongChang. The Japanese skater earned silver in the women's 1,000m and finished 6th in the 1,500m.

The three-time Olympian, who has been struggling with a chronic knee injury, now eyes her second life off the ice.

"Due to the knee injury, I had lost my sense of speed. It took a year and half to regain it," she said. "Finally, it's over."

But she stressed that it does not mean her immediate retirement from competitive racing.

"It's too early to say if I'll retire here. You can watch me on the track for a while," Lee said. "I just want to take some full time off after this Olympics."

However, she refused to give an exact answer to the question of whether she will compete at the next 2022 Olympics.

"Sometime in the last season, I asked Nao (Kodaira) whether she would race at the Beijing Games. She answered 'Not without you,'" Lee said, laughing. "At that time, I thought it was just a joke. But now, the question is too hard to give an answer to."

Lee said the roars and cheers of South Korean home fans made her cry after crossing the finish line.

"It is an honor that I participated in the Olympics held in my country," she said. "And I was relieved a lot as I could brush off the pressure. It was like a present for me, and my eyes were filled with tears. I've raced for the Olympics, and it finally finished. That's why I shed tears." 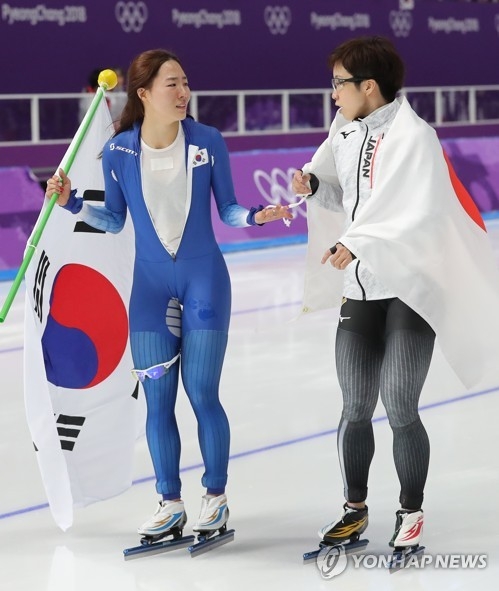