The leader and main songwriter of boy band BIGBANG began his five-week basic Army training session in Cheorwon, Gangwon Province. He will be assigned to an Army unit, where he will serve out the rest of his mandatory duty after finishing his basic training.

In South Korea, all able-bodied men have to fulfill military duty for around two years. 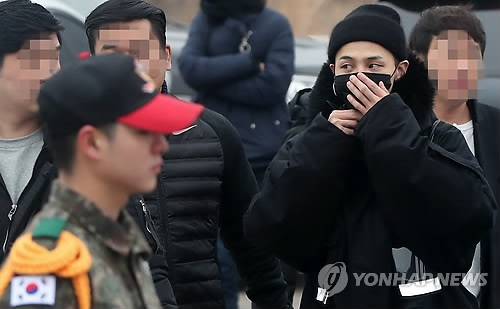 The singer arrived at the Army's Third Infantry Division in Cherowon, 90 kilometers north of Seoul, at 1:50 p.m., together with around 10 YG Entertainment employees. Around 200 fans, including some from Japan and Taiwan, came to say goodbye.

G-Dragon remained silent when reporters asked him how he felt about starting his military duty. After entering the gates of the traning camp, G-Dragon said farewell to his fans by bowing.

G-Dragon, whose real name is Kwon Ji-yong, is the second of the five BIGBANG members to join the military. T.O.P, the band's main rapper, is carrying out his mandatory duty as a public service worker at Yongsan-gu Ward Office. Taeyang plans to enlist on March 12.

Debuting in 2006 as a BIGBANG member, G-Dragon penned many of the group's hit songs, including "Bang Bang Bang," "Last Farewell," "Lies" and "Good Boy."