SEOUL, March 4 (Yonhap) -- President Moon Jae-in on Sunday reiterated his support for the "Me Too" movement and promised to root out sexual violence and gender-based discrimination.

Moon sent a message to a ceremony in central Seoul in commemoration of the March 8 International Women's Day, which highlighted the snowballing campaign against sexual abuses in the deeply male-dominated Korean society.

"With the Me Too movement, our society is in the midst of a crucial change," Moon said in the congratulatory message. "The movement is leading Korea toward a society in which sexual equality and women's rights are realized and the dignity of all people is respected."

He declared acts of sexual violence to be grave crimes that threaten democracy and the community and pledged to step up efforts to fundamentally eliminate gender-based abuse and discrimination.

"We are now reflecting how deeply the structure of sexual discrimination is entrenched in our society and are facing up to the reality that this is by nature about routine discrimination and oppression against vulnerable people," he said.

Since a female prosecutor revealed in January that she was sexually assaulted by a senior colleague several years ago, the Me Too movement has spread quickly across the country, including in the culture, arts, education and religious sectors.

During a meeting with senior aides late last month, the president expressed his respect for the victims who have spoken out and urged authorities to investigate cases thoroughly. 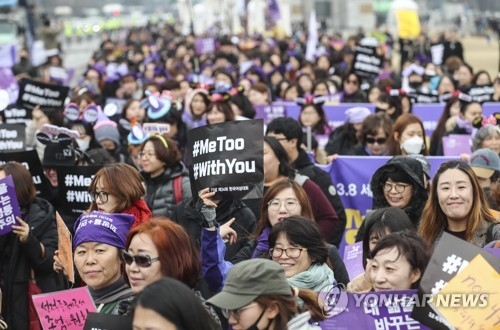 Hundreds of activists and citizens gathered for the Women's Day ceremony at Gwanghwamun Plaza in central Seoul, many of them clad in black and holding banners bearing the slogans of "#MeToo" and "#WithYou."

Victims of sexual violence, ranging from a teenage student to a former professor and an ex-political party worker, took the podium to disclose their suffering and call for justice to be dealt to offenders.

The Korean Women's Association United, the organizer of the event, issued a statement calling for women to unite and for the government to get tougher on sexual crimes.

"The problems concern not only the perpetrators of such crimes but also the structure of discrimination, abetment and silence that made them possible," the statement said. "It is time for the state to answer to the voices of these women."
(END)

President Moon reiterates support for 'Me Too' movement

President Moon reiterates support for 'Me Too' movement