A follow up to "Purple," the group's fifth EP, released in June last year, "Yellow Flower" holds seven unique tracks, including the minimalist ballad, "Paint Me," which was released in January.

Mamamoo's spring-themed record is the first in a new "Four Seasons" series and will be followed by different seasonal and color-themed projects throughout 2018.

"I think we're all thinking together about spring. We didn't necessarily try to make a spring-themed album, but the collection of songs ended up having an emotions associated with spring," Hwasa said during a media showcase held at Yes24 MUV Hall in western Seoul. 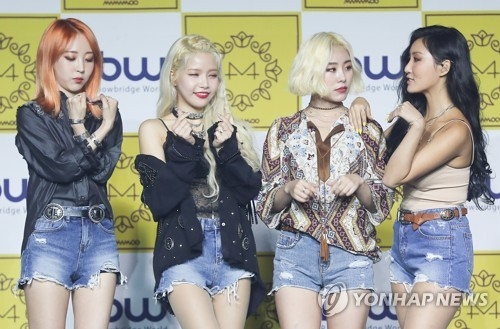 Lead song "Starry Night" is a dynamic electro house dance track fused with Latin guitar riffs. It was written by Kim Do-hoon, founder of Mamamoo's management agency RBW and the person responsible for the team's past projects. "Star, Wind, Flower and Sun" is a poignant piano-accompanied ballad written by member Solar, with the title referencing the symbols of the four members.

The K-pop group is mostly known for its powerful funk-driven R&B songs, while also being witty or boyish at times. But with "Yellow Flower," Mamamoo decided to adopt a concept that is both feminine and mellow. "Yellow mellow would be the description for the album," Hwasa said.

The quartet debuted in June 2014 with "Mr. Ambiguous," the lead single from its EP "Hello." It has enjoyed successive hits such as "Piano Man," "Um Oh Ah Yeh," "You're the Best," "Decalcomanie" and "Yes I Am."

Mamamoo has since occupied a unique place within the female idol market. Though categorized "idols," the ladies have always had a strong sense of theatricality in their songs and live performances. They are also aggressively engaging in the song writing and production process.

"I haven't done much during the hiatus. I think I rested while writing music," said Solar.

Member Hweein also chimed in: "Our immediate goal is probably maturing musically. I think we'll try out new directions and concepts, and try to expand our horizons musically." 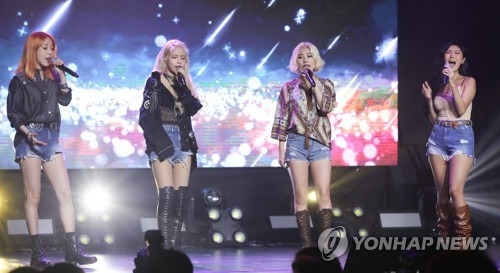