SEOUL, March 26 (Yonhap) -- A quick fix to a free trade agreement between South Korea and the United States helped ease uncertainties for local businesses, at least for now, but they will still have to vigilantly guard against a looming trade war triggered by U.S. President Donald Trump, Seoul's point man on trade said Monday.

Seoul and Washington have reached a tentative agreement to revise their six-year-old trade deal, which focused on providing easier access to the Korean market for American vehicles. In return, South Korea received an exemption from a 25 percent steel tariff with a quota of about 2.68 million tons, or 70 percent of the average exports to the U.S. over the previous three years.

South Korean Trade Minister Kim Hyun-chong said his negotiation team promptly advanced the FTA talks alongside the tariff negotiations to hold off the hefty steel duty's impact on Korean exporters before its implementation, while taking into consideration the relatively low market share of American cars in the country. 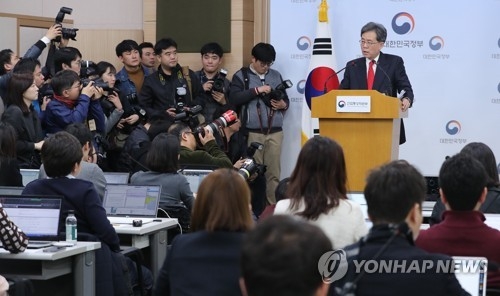 American car brands accounted for 6.8 percent of all imported cars sold in South Korea as of February, falling far behind European brands, with 77.8 percent, and Japanese, with 15.8 percent, according to the Korea Automobile Importers and Distributors Association.

"As South Korea became the first nation to wrap up negotiations to get the steel duty exemption, it resolved uncertainties for Korean steel makers at an early stage," Kim said in a briefing in Seoul, upon returning from his trip to Washington.

South Korea was considered to be in a difficult situation at the beginning as it was the third largest steel exporter to the U.S. as of 2017 and held the biggest volume of steel imports from China, which was sharply criticized by the U.S. for steel supply glut.

In the third round of FTA talks, South Korea agreed to lower safety and environmental regulations on American vehicles and extended a 25 percent duty on Korean pickup trucks for another 20 years up to 2041.

It also doubled the number of vehicles that can enter the Korean market without meeting its safety regulations to 50,000 units a year. The number of American vehicles imported to South Korea under the allowance hovered below 10,000 units last year, Kim pointed out.

But Korean negotiators defended against demands for higher content requirement of U.S. auto parts, also a contentious issue in the ongoing North American Free Trade Agreement, as local manufacturers have raised concerns over its direct impact on their supply chain.

"The U.S. focused on autos and auto parts as 74 percent of South Korea's trade surplus with the U.S. came from this sector. We reached an agreement by accepting some of the U.S. demands in regard to market access," Kim said. "We took consideration of the fact that no companies are currently exporting domestically-produced pickup trucks to the U.S."

While Washington called for further opening of the agriculture and livestock market, Seoul refused to make changes to the sector that has suffered massive damage due to cheaper U.S. food products since implementation of the trade pact.

"There have been concerns that South Korea may be in a defensive position as the U.S. has taken a hard-line approach with threats of scrapping KORUS FTA," said Kim, who led KORUS negotiations under the administration of former President Roh Moo-hyun. "Talking as a negotiator, I didn't feel cornered."

Working-level officials are currently ironing out some final details before a formal signing, which will need ratification by the legislatures of both countries before it goes into effect.

"The best result out of negotiations comes when both sides depart leaving some things to be desired. If the result is too lopsided to one party, it could lead to a renegotiation later," Kim said. "I hope there won't be another renegotiation in the future."

Despite the speedy agreement, concerns remain over rising trade tensions between the traditional allies as the Trump administration has taken a series of protectionist measures, such as safeguard duties on Korean washers and solar panels.

The top negotiator said he also asked for relief from safeguard duties on Korean washers and solar panels during recent meetings with American economic officials, but the prospects remain unclear because the duties were imposed at the request of American companies.

"As the trade disputes (of washers and solar panels) took place the private sector, not decided by the government, we will have to wait and see," he noted.

The Seoul government earlier said it is considering filing a complaint with the World Trade Organization over the safeguard duties as bilateral consultations have failed to yield a compromise.

While the tentative agreement made progress in "urgent trade issues," Kim said the Seoul government and companies will have to continue preparing for potential business risks as the Trump administration is preparing to strengthen punishment on China for intellectual property theft.

The move, based on Section 301, the authority by which the U.S. can take action against countries for violations of trade agreements or unfair practices, has raised worries over further stoking patent disputes in tech industries.

"We have to take all things into consideration because trade is not a just a matter of numbers," said Kim, who formerly worked as chief legal officer at Samsung Electronics Co. "Companies need to prepare trade dispute lawsuits."

The U.S. is South Korea's second-largest trading partner after China, with bilateral trade reaching $119.3 billion in 2017, according to government data.

South Korea's trade surplus with the U.S. fell from $25.8 billion in 2015 to $17.8 billion last year on sluggish sales of autos and steel, and as the country imported more American beef and natural gas.