The women's football team, led by head coach Yoon Duk-yeo, will compete at the AFC Women's Asian Cup that will take place in Jordan from April 6 to 20. The competition will double as the final Asian qualification for the 2019 FIFA World Cup in France, with the top five nations qualifying for the showpiece event in women's football.

Cho is one of two South Korean players on Yoon's 23-player roster who plays in Europe. The 29-year-old midfielder in February signed with Avaldsnes IL, becoming the first South Korean woman to play in Norway. The other Europe-based player is forward Ji So-yun, who plays with English side Chelsea Ladies FC.

Cho said she will try to show what she learned in Norway, especially in their opening match against Australia. At the AFC Women's Asian Cup, South Korea are in Group B with defending champions Japan, Australia and Vietnam. 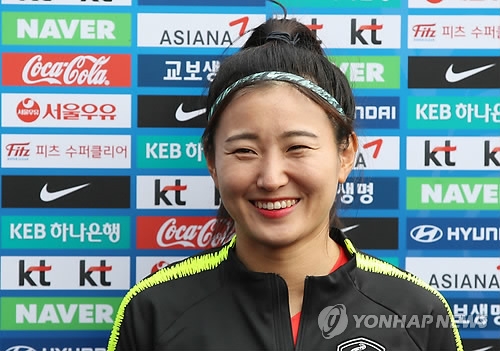 "I've been in Norway for a short period of time, but I learned and practiced to overcome physical opponents," she said to reporters at the National Football Center in Paju, north of Seoul. "Ji has been playing a long time in Europe, so she will also help our team."

At the AFC Women's Asian Cup, the top two teams from the two groups will reach the semifinals, and the third-place teams from each group will square off in the fifth-place match for the last ticket to the FIFA Women's World Cup.

Cho said her goal is obviously to win a World Cup ticket, but she wants her team to achieve it with impressive results.

"Of course, we have to be inside the top five, but I hope we can reach the final," she said. "I want us to get a ticket with good results."

Cho is the most experienced player on the roster with 108 caps. She captained South Korea at the 2015 World Cup in Canada, where they reached the round of 16 for the first time.

"It isn't easy," Cho said of her captaincy. "It's hard, but at the same time, you learn many things from it. I'm ready."