There was no cap on the number of players that could be placed on the provisional team, and only those on this preliminary roster may be named to the final team of 24 players.

The 2018 Asian Games will take place in Jakarta and Palembang, Indonesia, from Aug. 18 to Sept. 2, and baseball will be played at Gelora Bung Karno Sports Complex in Jakarta.

The deadline to submit the provisional roster is Wednesday. The KBO said it hasn't been informed of the deadline for the submission of the final roster.

South Korea is the two-time defending champion in baseball. The KBO will go on an Asian Games break from Aug. 16 to Sept. 3 to accommodate the regional competition. 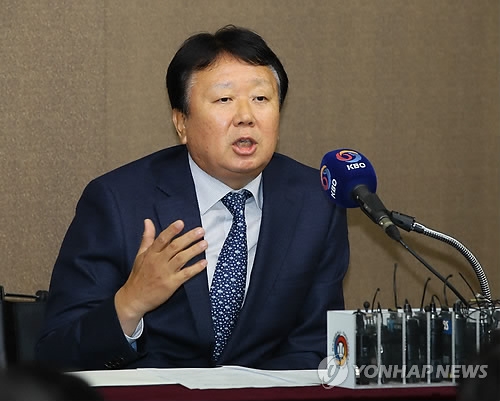 Kia Tigers' left-hander Yang Hyeon-jong, the 2017 KBO regular season and Korean Series MVP, should be one of the starters for the national team, alongside the 2008 regular season MVP Kim Kwang-hyun, an SK Wyverns starter who has returned to form in 2018 after missing the entire 2017 season with an elbow injury.

But Sun has often said he would try to pick the best players available at his disposal, regardless of their military status.

The provisional baseball team does include a pair of KBO regulars who are past that age limit and who will have to join the military as early as next year if they don't win an Asian Games gold medal. They are LG Twins' shortstop Oh Ji-hwan and Samsung Lions' outfielder Park Hae-min, both 28.