SEOUL, April 10 (Yonhap) -- The Seoul city government and the national heritage agency announced a joint initiative Tuesday to redesign the pedestrian plaza at the heart of the capital as part of urban planning aimed at bolstering public convenience and restoring history.

Gwanghwamun Square, located in the middle of the 10-lane Sejongro main street in central Seoul, will be turned into a new space that nearly quadruples the current area, according to the plan unveiled by the Seoul Metropolitan Government and the Cultural Heritage Administration.

Under the envisioned plan for a 2021 completion, the new square will be expanded into the space where there is currently a road running by the Sejong Center for the Performing Arts.

It means the current 10-lane street will be reconstructed into a six-lane road that runs past the U.S. Embassy and KT headquarters. To get from one side of the square to the other, passers-by will only need to cross over one road.

A new square will also be built on part of Sajikro street that intersects with Sejongro street in front of the Gwanghwamun gate, the main entry to the ancient royal Gyeongbok Palace.

"The point of this project is to transform the area into a pedestrian-oriented space by integrating the place that had remained cut off in the middle like 'one giant median strip' and by restoring history as one of the ancient fortresses," a Seoul city official said.

The new Gwanghwamun Square will cover some 69,000 square meters, or 3.7 times more than the current area, the Seoul city said.

The Seoul city and the heritage body plan to hold public hearings to gather citizens' opinions on the project and also put the design up for an open competition in August. 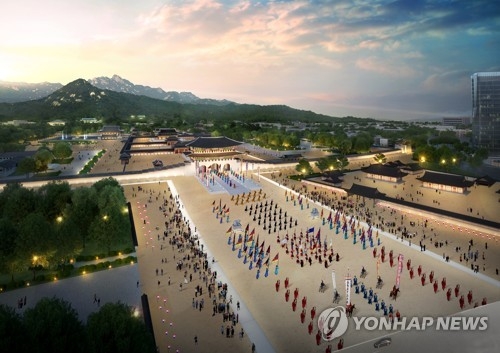