SEOUL, April 16 (Yonhap) -- A South Korean baseball player was warned by the league office on Monday over his use of foul language on the field.

The Korea Baseball Organization (KBO) said it issued a "stern warning" to the Hanwha Eagles outfielder Lee Yong-kyu for uttering profanity during a game last week while expressing his displeasure over a called strike.

The incident happened in the bottom of the seventh inning against the Samsung Lions at Hanwha Life Eagles Park in Daejeon, 160 kilometers south of Seoul, last Friday. Lee was called out on strikes, and he jumped up and down just outside the batter's box in frustration and cursed.

Though Lee didn't direct his foul language at home plate umpire Hwang In-tae, Hwang spoke with Lee briefly, apparently asking the player what he'd said, and then ejected him from the game. 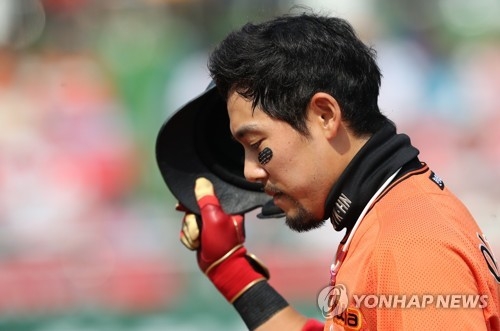 Under the KBO regulations, players are banned from cursing during games. The league office said it will mete out an even stronger penalty in case of recurrence.

Lee's ejection has further fueled tensions between players and umpires in the KBO this year.

The KBO also prohibits players from arguing balls and strikes with home plate umpires. That particular clause was added on Feb. 1 this year, and players have complained about it because they are no longer allowed to so much as say a word to umpires or ask them simple questions, if the rule is to be interpreted literally.

And yet later in the same Eagles-Lions game last Friday, Samsung infielder Lee Won-seok was allowed to stay in the game even after arguing with Hwang over a called strike.

Doosan Bears' infielder Oh Jae-won became the first victim of the new rule on April, 3, when he was tossed from a game after asking the umpire whether a pitch was high.

Last week, Bears' catcher Yang Eui-ji received a fine of 3 million won (US$2,790) for unsportsmanlike conduct directed at the home plate umpire. After expressing his displeasure at a called strike at an earlier at-bat, Yang let a warm-up pitch sail past him and nearly hit umpire Jung Jong-soo in the leg. Yang said he only lost the sight of the pitch and denied he'd intended to hurt Jung.