SEOUL, April 26 (Yonhap) -- The government and ruling Democratic Party on Thursday discussed a proposal to designate the bid by the southern port city of Busan to host the 2030 World Expo as a state project, party officials said.

Busan, the country's second largest city, 450 kilometers south of Seoul, has been pushing for the designation to boost its bid to host the event overseen by the Bureau International des Expositions (BIE), an intergovernmental body headquartered in Paris.

The 2030 edition will be a larger-scale "registered" one compared with the smaller "recognized" ones that the South Korean cities of Daejeon and Yeosu hosted in 1993 and 2012, respectively.

"The government and party will review the feasibility of the bid and continue to discuss how to push for it," Kim Tae-nyeon, the ruling party's policy chief, said during a policy coordination meeting with the government. 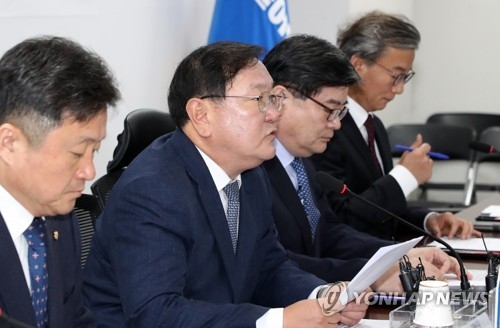 The meeting was attended by senior party and government officials, including Vice Finance Minister Kim Yong-jin and lawmakers from Busan, such as Reps. Choi In-ho, Chun Jae-soo and Kim Hae-young.

"To push for the sanctioned expo, we will craft related government procedures and launch pan-government discussions on the issue," the vice minister said.