SEOUL, May 8 (Yonhap) -- Nearly 9,300 artists or groups were unjustly excluded from state support or were even illegally inspected under the past two conservative administrations, a civilian-government fact-finding committee said Tuesday.

After about a 10-month probe into nine sorts of so-called artists blacklists written by relevant authorities under the reigns of President Lee Myung-bak and his successor President Park Geun-hye from 2008 to 2016, the committee tasked with finding the truth about the blacklists said 8,931 individuals and 342 groups were confirmed to have been subject to mistreatment.

A total of 21,362 names were originally included on the lists, and the total was slimmed down to 9,273 to remove overlapping, according to the committee. 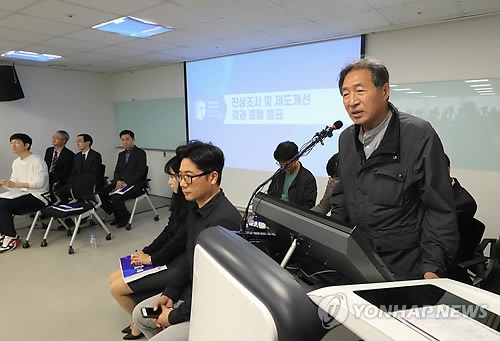 Many of the artists were put on the blacklists simply for expressing their support for joint statements criticizing the governments over contentious social issues.

Some of the most popular Korean films -- such as "The Host" and "Snowpiercer" by director Bong Joon-ho; "Joint Security Area" by Park Chan-wook; and "Factory Complex," the winner of the 2015 Silver Lion at the Venice Biennale, by media artist and film director Im Heung-soon -- were barred from being shown in overseas Korean film festivals for highlighting government mismanagement and for various other reasons.

The Lee Myung-bak government mainly used the method of inspecting, censoring and excluding from state support famous artists deemed critical of the government based on information from the National Intelligence Service (NIS).

Under President Park Geun-hye, her presidential office made extensive use of the blacklists in close cooperation with the NIS and the Ministry of Culture, Sports and Tourism, the committee said. 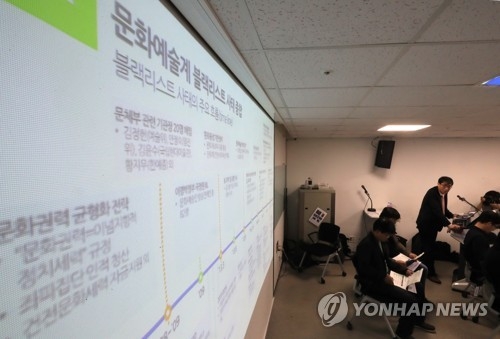 It said it will recommend that the incumbent government request criminal investigations and take disciplinary measures against all civil servants found to have been involved in the process of illegally discriminating against blacklisted artists.

The committee also unveiled its plan to recommend that the government enact laws for punishing crimes of violating "freedom of expression" and set up an independent state committee that will take over the culture ministry's work of supporting artists.

The fact-finding committee is scheduled to finish its activities at the end of next month with the release of a white paper on its ongoing probe.

"Arts does not belong to the real world but to the world of imagination. We need to ensure freedom of artistic expression to make arts productive," Shin Hak-cheol, a painter who co-chairs the committee with culture minister Do Jong-whan, said during a press conference to announce the probe result. "I hope the government will accept our recommendation plans well."