SEOUL, May 12 (Yonhap) -- North Korea is said to have sharply scaled down an annual firing contest for its armored units, apparently reflecting the rising detente on the peninsula, government officials in Seoul said Saturday.

North Korea's major armored units hold a tank mobilization and firing competition in the first six months of the year.

The North's leader Kim Jong-un observed the contest in 2016 and 2017 in person, but didn't show up at this year's event, according to the Seoul officials.

In addition to Kim's absence, the size of this year's competition was reduced by about half, they noted. 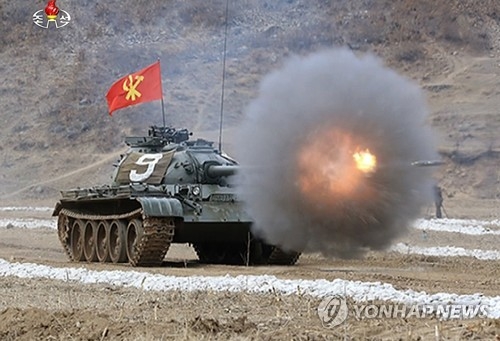 "The North Korean military held a mobilization and firing competition among its tank units in a border area last week. But the number of participating units and equipment decreased remarkably from last year," said a government source.

The annual competition, usually held in frontline areas among the North's major armored units, is for training but has been conducted in a manner similar to an actual battle. Tanks are scored by how fast and how well they fire at moving and fixed targets, as well as their skill in avoiding obstacles.

Kim, a basketball aficionado, has changed the armored units' training into a kind of sports competition and has prodded even aged unit commanders to drive tanks by themselves in the contest.

The Seoul officials say the downsizing of this year's armored unit competition appears to be related to improving inter-Korean relations following Kim's summit with President Moon Jae-in on April 27. South Korean and U.S. forces also conducted their annual military drills in a low-key manner this year. Kim plans to meet with U.S. President Donald Trump in Singapore on June 12.