SEOUL, May 15 (Yonhap) -- The most typical scene observed on Teachers' Day in South Korea is students pinning a red carnation on their teachers' chest.

But this heart-warming gesture of respect and appreciation could lead to trouble for the giver and the recipient, if the giver is not a representative for students.

In accordance with the country's anti-graft law, even a small flower, not to mention coffee or homemade cookies, could result in a fine equal to five times the cost of the present for both pupils and teachers alike, as such tokens are all lumped together as bribes.

"The only exception to this rule are student representatives offering flowers in public on behalf of all his or her peers," Park Eun-jeong, the chief of the country's Anti-Corruption & Civil Rights Commission (ACRC), told reporters last month.

"Students, as a collective, are barred from giving any 'tangible materials' to their teachers other than a carnation. Individually, students, as well as parents, cannot offer any gifts or hospitality, even a flower made with paper," she stressed. 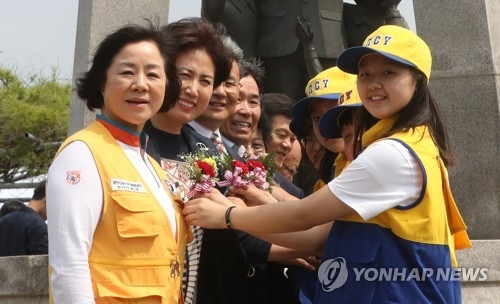 South Korea has celebrated May 15 as Teachers' Day since the 1960s, and this year is the second to come after the enactment of the Improper Solicitation and Graft Act, also called the Kim Young-ran Law, named after its architect and former ACRC chief, in September 2016.

The law aims to eradicate deep-rooted corruption, and it is not an exaggeration to say that it has brought about sweeping changes in many corners of society.

Under the law, public servants, educators and journalists are banned from accepting meals valued over 30,000 won (US$28.11), gifts worth more than 50,000 won or congratulatory or condolence money of more than 100,000 won. Offenders will face a maximum sentence of three years in jail and a fine of up to 30 million won.

Teachers, however, are an exception in that they are prohibited from accepting even very small gifts, as their relationship with students and their parents are characterized by "constant evaluation and instructions" and trivial things could damage the fairness of teachers' serving their due duties, according to the law.

The changes drew mixed responses from education circles, though parents, in general, welcomed the move.

"I used to be fret a lot about what to buy for Teachers' Day. I had to scour moms' websites to gather opinions to find something suitable," said Park Ha-young, 44, a mother of two.

"When my kid was a first grader in primary school, I could not even sleep at night out of concern that if my present was inferior to what other moms gave, that would affect the teachers' treatment of my child," she sighed. "Now, those days are gone, and I am quite relieved."

Her comments drew an instant grumble from her teenage girl.

"All my classmates used to pay around 2,000 won each and bought a small gift for our teachers. On Teachers' Day, we would sing a song, read letters written to teachers, and share cake and other goodies. It was like a surprise party, and a source of good memories," said Shim Eun-ji in a second year of her high school.

"I don't understand why we cannot do that now. We had done that voluntarily, and it cannot be a bribe," she said, stressing that the rules don’t make sense.

Teachers also voiced anger over negative attention around this time of year, complaining that the law and media reports regard them as "potential criminals."

"It is so sad and embarrassing when I have to explain to students why I should not accept even a piece of candy," said Kim Ah-ram, an elementary school teacher for 13 years.

On the presidential web site, citizens call for abolishing Teachers' Day, while others say it is better to designate it as a national holiday.

"We did not ask to be given a flower, and why does the government hurt our pride this way?" said one teacher, who declined to be identified.

"The government and society have long regarded teachers as an incompetent entity who just seeks bribes. Please, just get rid of Teachers' Day," the educator said. This petition had garnered support from nearly 11,000 people as of Tuesday. 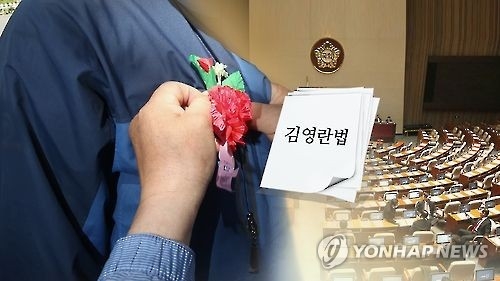 Leaving all these controversies behind, schools are trying to creatively maximize the significance of Teachers' Day while minimizing friction.

In Dongmyeong High School in the southwestern city of Gwangju, teachers and students are holding a foot-washing ceremony on Tuesday as a token of mutual respect and gratitude.

All members of Gwangmyungbuk Middle School are going hiking, which "helped create chances for teachers and students to have dialogue in a freer atmosphere outside the classroom," according to school officials.

At Jeonghwa High School in Seoul, teachers are trying to make the day special for students by organizing several events; they are handing out bread to encourage them not to skip breakfast and offering a "free hug" as a pep talk. They also plan a "teacher-student" photo contest to boost affinity with pupils.

"It is a bit heartbreaking that the meaning of Teachers' Day has faded. But I believe there are still many ways to recognize teachers' work," said Jeongwha school teacher Pai Ku-seong said.

In order to avoid controversy from the outset, eight schools in Seoul, as well as dozens across the country, decided to designate the day as a temporary holiday.

Two years after enactment, the anti-graft law appears to have effectively reshaped the perception and the overall sentiment on Teachers' Day.

In a survey of 2,575 teenage students, 40.3 percent of respondents -- the largest share -- said "a surprise event," such as singing and dancing, tops their wish list for teachers, followed by a thank-you note with 39.4 percent. The survey was conducted by Hyungji Elite Inc., a school uniform maker.

"Students and parents, as well as schools themselves, should begin to think of alternatives to carnations, or any physical gifts, to express gratitude to teachers. Though some could argue that Kim Young-ran Law deserves criticism for its forceful nature, such changing culture demonstrates its positive effects, and the very change is what the law is aimed at," said Lee Taek-kwang, professor at Seoul's Kyunghee University.