The 61-year-old North Korean defector has been leading the campaign since 2003 aimed at helping North Koreans learn the truth about the isolated country and the outside world.

Lee himself decided to escape the repressive country decades ago after reading a leaflet from the South. Lee came to the South in 1995 after his first attempt failed in 1990.

"The leaflet said the Korean War (1950-53) broke out due to the North's aggression, not by the United States and the South's invasion. That's different from what I had learned," Lee said. "I came to realize everything that I was taught in the North was untrue." 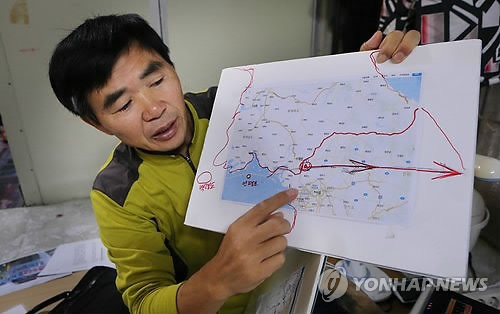 But his campaign is now facing a serious challenge, as South Korean President Moon Jae-in and North Korean leader Kim Jong-un agreed in their historic summit in late April to restore inter-Korean exchanges and seek lasting peace on the peninsula.

What angered Lee and colleagues is that the leaflet campaign was cited in the joint summit declaration as one of the "hostile acts" that the two Koreas agreed to end.

The declaration showed that the Koreas agreed to completely cease all hostile acts against each other starting May 1, including loudspeaker broadcasting and leaflet launches along the border.

In a strongly-worded statement, Seoul's unification ministry called on activists May 4 to immediately stop their leaflet campaign, warning that the government can take stern actions to deter them if necessary.

"The leaflet launch is an 'outright violation' of the spirit of the summit declaration," the ministry said.

"It is desirable that civic groups immediately suspend the move, to bring peace to the peninsula and ease military tensions, as it heightens tensions along the border and is a cause of conflicts," it added. 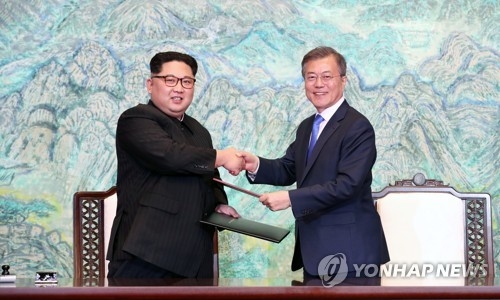 The two Koreas staged their own leaflet campaigns against each other as a tool of psychological warfare following the Korean War, which ended in a truce, not a peace treaty.

In the midst of thaws following the first inter-Korean summit in 2000, they suspended leaflet distributions at the state level.

In June 2004, Seoul and Pyongyang agreed to end propaganda campaigns, including border broadcasts and the sending of leaflets, under the liberal South Korean government. But civic activists have kept sending balloons carrying leaflets, inviting backlash from North Korea.

The previous conservative government under President Park Geun-hye said that Seoul cannot curb the leaflet launches as they are a matter of freedom of speech. But it also added the move should not pose serious threats to residents living near the border.

In October 2014, tensions over leaflets heightened as the North fired machine guns at balloons launched by activists. Some bullets landed in South Korean territory, though no one was hurt.

North Korean refugees and human rights activists said that the government should not restrict civilians from sending leaflets.

"It is nonsense that the government is seeking to obstruct civilians' activities in a democratic society where freedom of expression is guaranteed," said the activist Lee.

Jung, who used to fly leaflets in Chinese areas bordering the North, is currently staging the drive to let hundreds of plastic bottles that carry rice and USBs containing Korean television dramas flow to the North by sea.

"North Koreans are denied the right to know in a tightly-controlled regime. We are helping them get access to outside information," he said.

On May 5, police stopped a group of defectors balloons in Paju, just south of the border, from launching balloons. Some 150 residents of the city and progressive civic group members held a rally against the leaflet distribution.

"North Korea's three-generation dictatorship has not been overthrown. We will continue our campaign for North Koreans," said Park Sang-hak, a North Korean defector, the chief of another group of activists. 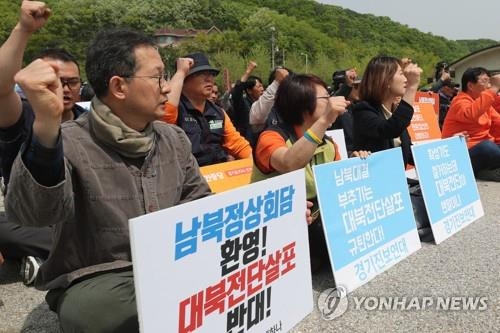 Experts said that activists need to refrain from launching leaflets at a time of improving inter-Korean relations.

"I think it is desirable for the government to advise them to stop the campaign if leaflets only provoke the North and spur tensions," said Cheong Seong-chang, a senior research fellow at the Sejong Institute.

Kim Yong-hyun, a professor at Dongguk University, said that as the two Koreas are standing at a critical time to discuss the North's denuclearization and a peace regime, it is advisable to refrain from engaging in activities that can be seen as hostile to each other.

"Flows of information should be made naturally. Seoul needs to promote inter-Korean cooperation to help the North reform and open up its door. In that process, outside information would make its way to the North."

Cheong of the Sejong Institute said that Seoul also needs to take issue with North Korea's human rights violation in a departure from its low key stance on the North's right records when inter-Korean ties remain warm.

"The government could consider providing incentives to the North, such as building infrastructure, if Pyongyang abolishes its prison camps," the expert said.

Amid a heated controversy over leaflets, the defector Lee said that he will temporarily suspend the campaign until the summit between U.S. President Donald Trump and Kim, which will be held in Singapore on June 12.

But that does not mean he will give up his drive as he is determined to fly leaflets until North Koreans are granted their basic rights.

"I think that leaflets serve as something like the press to North Koreans as they provide outside information," he said. "The campaign targets ordinary North Koreans who are living in the darkness." 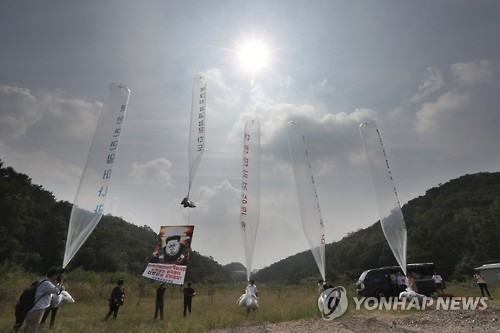