SEOUL, May 17 (Yonhap) -- South Korea plans to open a research institute in August to delve into the issue of wartime sexual violence against women as part of efforts to commemorate the Korean women sexually exploited by the imperial Japanese army during World War II, the gender minister has said.

"South Korea should be the mecca for the issue of wartime suppression of women's rights," Minister of Gender Equality and Family Chung Hyun-back said in a meeting with journalists Wednesday.

"The opening of the research institute for comfort women is planned for August," she noted.

The new institute will be in charge of archiving related academic records from across the world and looking into the cases of Korean women enslaved for Japanese soldiers during World War II, while the Korean Peninsula was under colonial control of Japan.

The government is also planning a set of other commemorative projects for the wartime sex slaves, including the opening of a commemoration space at the cemetery of the victims, as well as an exhibition for them also in August.

The minister also drew on the South Korean foundation established two years ago to resolve the diplomatic rift with Japan.

After the two countries signed an agreement to end the comfort women feud in December 2015, Seoul set up the Reconciliation and Healing Foundation funded by Japan to compensate the victims. Last year, however, the Moon Jae-in government defined the bilateral deal signed under the previous administration as "seriously flawed" and decided not to use the Japanese fund worth US$9.1 million,

"The foundation is not functioning right now after five members of its board of directors resigned," Chung said, suggesting the virtual disbanding of the foundation.

The government plans to establish its own fund of the same size to compensate and commemorate the comfort women victims, and related government agencies are currently discussing details of the plan, the minister also noted. 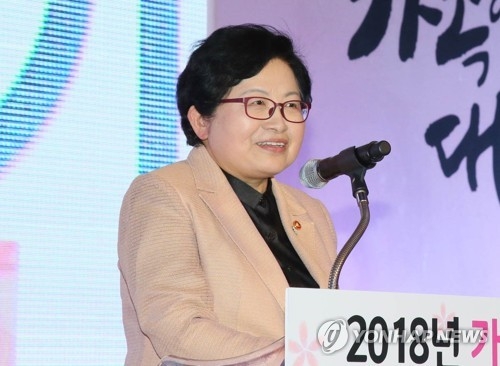