SEOUL, May 17 (Yonhap) -- North Korea threatened again Thursday to not hold talks with South Korea unless Seoul stops an ongoing military exercise with the U.S., casting a pall over inter-Korean ties after last month's historic summit.

The warning came hours after North Korea called off high-level talks with South Korea indefinitely in protest of the joint air drill between South Korea and the United States.

North Korea has frequently denounced the military drills as a rehearsal for invasion.

Ri Son-gwon, a North Korean official handling inter-Korea affairs, also took issue with a prominent North Korean defector's recent critical comments as another reason behind the cancellation of the talks.

"Unless the serious situation which led to the suspension of the north-south high-level talks is settled, it will never be easy to sit face to face again with the present regime of South Korea," Ri said in comments carried by North Korea's official Korean Central News Agency. 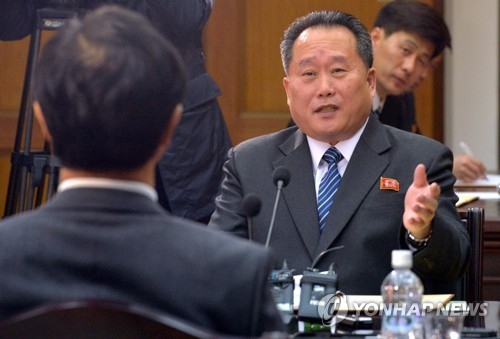 Thae Yong-ho, a former London-based North Korean diplomat who defected to South Korea with his family in 2016, expressed skepticism on Monday in parliament over the prospects of the North eventually abandoning its nuclear weapons.

Thae also held a ceremony at the National Assembly to celebrate the release of his memoir, which is critical of North Korean leader Kim Jong-un.

The North has bristled at any outside criticism of its leader.

Earlier in the day, South Korea said it will continue to urge North Korea to come forward for talks to discuss follow-up measures to recent summit agreement.

South Korean President Moon Jae-in and North Korean leader Kim Jong-un met last month at the truce village of Panmunjom, where they agreed to halt all hostile acts against each other, open a joint liaison office in the North's border city of Kaesong and pursue various economic cooperation efforts.