SEOUL, May 21 (Yonhap) -- The director and cast of "Burning" attended the red carpet premiere of the film at the 71st Cannes Film Festival on May 16.

As soon as director Lee Chang-dong and stars Yoo Ah-in, Steven Yeun and Jeon Jong-seo stepped on the red carpet at Cannes' Grand Theatre Lumiere, they were bombarded by flashing lights and the sound of the clicking camera shutters of photographers from all around the world.

The film received a five-minute standing ovation after its screening that night, leaving its actors in tears of joy.

It follows a mysterious incident involving two young men and a woman in their 20s. Yoo of the Korean hit movie "Veteran" plays a part-time deliveryman and aspiring novelist, Yeun of the U.S. television series "The Walking Dead" plays a well-off man with a secret hobby and newcomer Jeon plays the woman who comes between them. 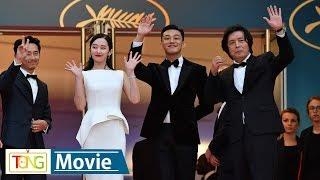