SEOUL, May 24 (Yonhap) -- Successful K-pop group BTS vowed to reward fans for their unchanging support and love by doing its best with its music and stage performances.

"We always thank our fans in South Korea and many other countries of the world for supporting and loving us," member Jimin said during a press conference at a Seoul hotel on May 24 to mark the release of the band's third studio album, "Love Yourself: Tear."

"We always struggle to find ways to return the love that they gave. ... We'll continue to work harder out of the thought that devoting ourselves to doing music and stage performances would be the best way."

"Fake Love," the lead track off the new album, swept domestic music charts upon its release on May 18. The album, consisting of 11 tracks, also claimed the top spot on iTunes' Top Albums charts in 65 countries, including the U.S., Australia and Brazil. Preorders already amount to over 1.5 million copies. 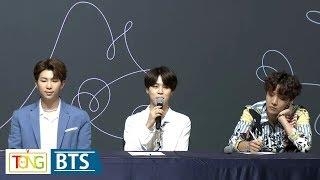