SEOUL, June 1 (Yonhap) -- Choi Ra-eun -- not her real name -- a 29-year-old living in Seoul, remembers clearly the day last year at a local supermarket when she saw a man secretly taking photos of another woman from behind.

Choi immediately informed the supermarket's security guards, and when the staff inspected the man's smartphone, they found photos of numerous women taken at various locations, from markets to bus stops.

"I was afraid to go shopping for quite a while after that incident," Choi told Yonhap News Agency. She said she felt living as a woman in South Korea was a challenge after her experience.

She raised the issue of how the country's male-dominated police seem to let people who secretly take photos of women go without taking any real meaningful action.

"I am not really the kind of person who likes to draw a line between the two genders, but society needs to admit that when it comes to sex crimes, especially those involve hidden cameras, females are usually the victims," Choi said.

She is not the only woman who has expressed views on hidden cameras in South Korea, a country with top-notch Internet speeds and high smartphone ownership. On May 19, 800 female protesters took to the street in central Seoul, expressing anxiety over prevalent hidden-camera related abuses in the country. 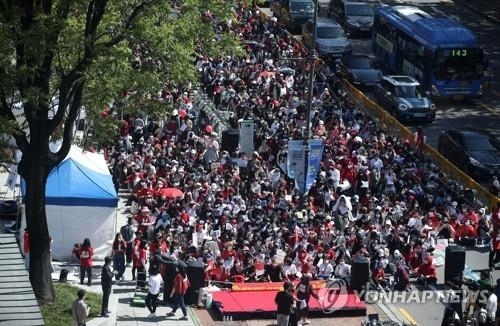 "Although females are victimized by hidden cameras even in public places, it is hard for us to see news of the men who film and leak such images being punished," the main organizer for the gathering said in a statement.

The protest focused on condemning the police for what they call "imbalanced" investigation of sexual abuse. The story began when a photo of a male model in the nude was leaked through a woman-only online community earlier this month.

The photo was taken secretly from a drawing class at Hongik University and has been referred to as the "Hongdae hidden-camera incident."

After the photo went viral online, the police started an investigation and arrested a female suspect who happened to be the victim's colleague only a few days after the case emerged.

Shortly after the victim was arrested, local feminist organizations started a campaign, condemning the police for making what they call an "unusually prompt" investigation to arrest the female suspect. They claimed that the police rarely pay attention when women are the victims of such abuses involving spy cameras but were extremely prompt making an arrest in the latest case when the victim happened to be a man.

Police said the accusation over the alleged biased probe is groundless and said the probe for the controversial case was carried out in accordance with the evidence they acquired and not because the victim was a male.

The police added they have been carrying out fair investigations on spy cam crimes regardless of victim gender.

According to data compiled by the police, 1,288 suspects in hidden-camera cases were caught January through mid-May this year, nearly all of them men. There were just 34 cases in which women were detained for potential infractions, and of these, only one suspect was arrested.

For all of 2017, around 96 percent of 5,437 hidden-camera related suspects were male and 119 of them were officially booked, the police added. None of the 283 female suspects were charged over the cited period.

The police also said the female suspect for the latest case was detained because the leak of the controversial photo severely infringed upon the victim's human rights, adding that this principle applies to all criminals.

Regarding the case, many men here also claimed that although it is inarguable that sexual abuse involving hidden cameras should be fully eradicated, labeling the police as misogynistic won't solve the problem and will only spark pointless gender conflict.

"The police were able to arrest the suspect quickly because there was clear-cut evidence. It is a disgrace to say that the police carried out a misogynistic investigation," said Yoo Byeong-eun, an activist from the Anti-feminism Association in South Korea. 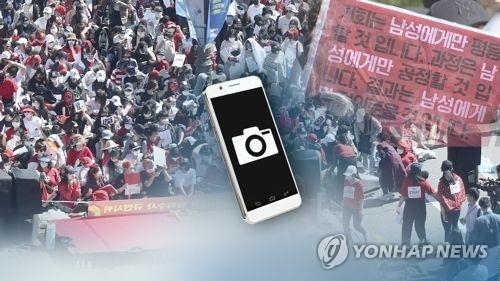 "The protesters are seeking to exert influence on the law enforcement system," Yoo added.

Yoo said South Korea's feminist movement should focus rather on more critical issues, including the neglecting of women's rights in North Korea, instead of "stretching the truth" on minor issues here.

Protesters, however, claim that it goes without saying that society has not been paying enough attention to victims of sexual abuse, especially those filmed or photographed by hidden cameras.

"Supporting victims is only a follow-up measure. There is a limit on helping the victims if there are no preemptive measures," an official from the center told Yonhap News Agency. "Platform operators have been sitting idle or have actively circulated (hidden-camera content) to raise massive profits."

The organization also helps victims to erase unwanted photos or videos of them circulating online and assists them throughout a police investigation.

The KCSVRC also said sex education should not be provided in a specific course but should be reflected in everyday life at school.

"We cannot expect students to act differently without having grown-ups change themselves," the group added.

Amid the development of smartphones and video-sharing platforms, there have been rising calls for sterner punishment of such crimes.

South Korea's criminal law stipulates that anyone who distributes or sells images taken without prior consent that can be viewed as sexual harassment may receive a prison term of up to five years or fines of up to 10 million won (US$9,259).

"Women cannot find comfort even in places previously considered to be safe, such as schools and hospitals," said Yun-Kim Jiyeong, a professor at Konkuk University's Institute of Body & Culture. "We have to understand that the latest protest reflects South Korean women's daily fears."

Yun-Kim said fears regarding hidden cameras limit what women can do in their everyday lives and thus such devices should be strictly controlled.

"Among other things, we need to regulate sales of hidden cameras. The government should track down all sales and adopt a registration policy for such products," the professor said. "The police agency should also educate its officers on how to deal with victims of these crimes."

The professor added the education ministry should also provide education on sex and gender issues customized for different ages starting in pre-school. 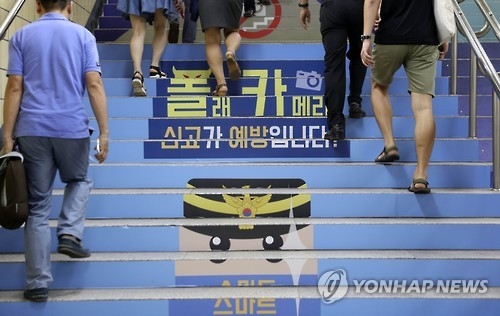