South Korea also proposed opening a liaison office in the North Korean border city of Kaesong as the first step to implement the agreements reached by their leaders in the April 27 summit. The North shared the need to open such an office as soon as possible, according to the official.

The proposals were exchanged at inter-Korean talks at the truce village of Panmunjom in the heavily fortified Demilitarized Zone that divides the Koreas. Its morning session ended after less than an hour.

During the morning session, South Korea called for the two Koreas to conduct a joint research to reconnect the severed railways and roads along their western and eastern regions, while expressing an intent to hold working-level talks at the earliest possible date to advance cooperation in military, sports, forestry and other areas.

The North agreed to the need to hold follow-up meetings to discuss cross-border cooperation, the official said.

A ministry source said the two sides are now working on the wording for agreements that they will announce after the talks, raising expectations that they have almost ironed out major differences. 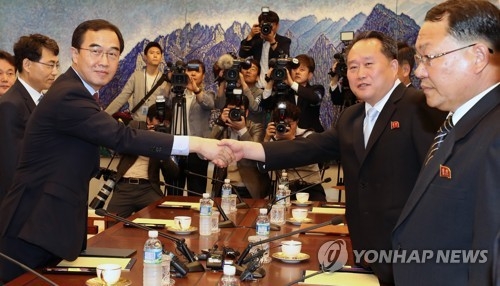 The inter-Korean meeting is mainly intended to discuss follow-up measures to the agreements that South Korean President Moon Jae-in and North Korean leader Kim Jong-un reached in their summits held on April 27 and May 26.

They promised to hold a reunion of families divided by the 1950-53 Korean War on the occasion of the Aug. 15 Liberation Day. It was expected that the two Koreas will discuss details related to arranging joint events to mark the June 15 declaration adopted after the first inter-Korean summit in 2000. Such joint events were last held in 2008 at Mount Kumgang on the North's scenic eastern coast.

Given that the delegations include officials handling transportation and railroad affairs, it was expected that linking railroads along their western and eastern regions could be on the agenda, as agreed upon in the April summit. 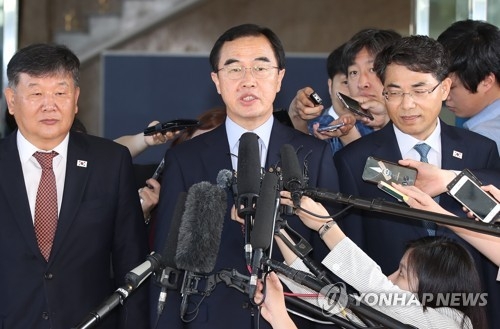 The North's five-member team is being headed by Ri Son-gwon, chairman of the Committee for the Peaceful Reunification of the Country. It also includes Vice Railroad Minister Kim Yun-hyok and Vice Sports Minister Won Kil-u.

The two Koreas emphasized the importance of mutual trust and respect before starting the inter-Korean talks.

"We can think of North and South Korea as the wheels that move the cart forward," he said, adding that the driving force behind the cart is mutual "trust and respect."

The abrupt and unilateral cancellation threw cold water over growing peace mood following the summit in April, which was the first of its kind between South Korean President Moon Jae-in and North Korean leader Kim Jong-un. The two Koreas previous held summits in 2000 and 2007.

In their second summit held last week, Moon and Kim agreed to hold high-level talks this week and agreed to work together to make a North Korea-U.S. summit happen.