(ATTN: UPDATES throughout with meeting with Chinese official, other details; CHANGES headline)
By Lee Chi-dong

The annual Shangri-La Dialogue comes amid cautious optimism about a historic breakthrough in efforts to denuclearize North Korea and formally end the 1950-53 Korean War with a peace treaty. As in previous years, the communist nation did not participate in the three-day dialogue.

A summit between the North's leader Kim Jong-un and U.S. President Donald Trump is apparently in the offing.

A team of North Korean officials is on a visit to Singapore for preparatory consultations with aides to Trump who openly expressed hope that the agreed-upon June 12 summit will go ahead in the city state.

The two sides are reportedly in talks over logistical details including a specific summit venue and schedule.

Shangri-La Hotel, where the security forum is under way, is among top candidates. It was the venue of the 2015 landmark meeting of the Chinese and Taiwanese leaders. 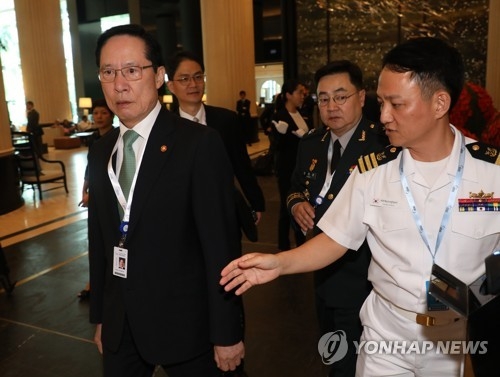 Defense Minister Song Young-moo, leader of South Korea's delegation to the dialogue, plans to use it as an opportunity to drum up support for Seoul's peace initiative.

He will deliver a speech at a Saturday session, titled "De-escalating the North Korea Crisis," on Seoul's push for the denuclearization of the peninsula and peace, as exemplified by two rounds of inter-Korean summit talks in recent weeks.

They "discussed the strengthening of cooperation between the navies and marine corps of South Korea and the U.S.," Song's ministry said.

Song then had a meeting with the Chinese delegation, led by Lt. Gen. He Lei, vice president of the Academy of Military Science of the People's Liberation Army, before attending the official reception for the participants in the dialogue.

The minister stressed the importance of Seoul-Beijing partnership in ridding North Korea of its nuclear weapons program.

He did not raise the issue of China's repeated dispatch of military aircraft into South Korea's Air Defense Identification Zone (KADIZ), a ministry official said.

China's assertiveness in the South China Sea is another main topic at the Shangri-La Dialogue, which is named after the hotel where it is held.

He announced that the Pacific Command will be renamed the U.S. Indo-Pacific Command (USINDOPACOM), citing the increasing connectivity between the Indian and Pacific oceans.

The defense chiefs of South Korea and the U.S. plan to hold talks on Saturday on the sidelines of the security forum, followed by a trilateral meeting involving their Japanese counterpart the next day.

The back-to-back meetings offer a chance for the three regional powers to coordinate a strategy on North Korea ahead of the highly anticipated Kim-Trump summit.

Launched in 2002, the Shangri-La Dialogue brings together defense ministers, other senior military officials and experts from dozens of Asia-Pacific and European countries.

It's co-organized by the International Institute for Strategic Studies (IISS), a British think tank, and the Singaporean government. 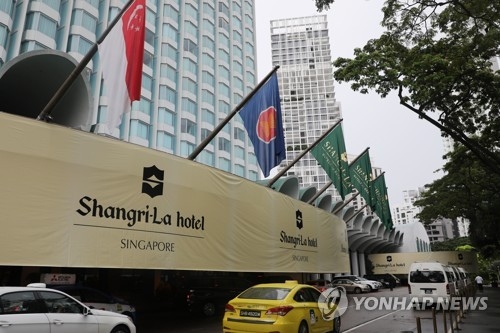