NEW YORK/WASHINGTON, May 31 (Yonhap) -- The United States and North Korea have made "real progress" toward a fruitful summit between their leaders on dismantling the North's nuclear weapons program, U.S. Secretary of State Mike Pompeo said Thursday.

"Through these series of meetings, I'm confident we're moving in the right direction," he said at a news conference, also mentioning parallel talks in Korea and Singapore.

But the top U.S. diplomat was unable to say if it will be known by Friday whether the summit will happen. Trump called it off last week, citing "open hostility" from the regime, and then put it back on track. 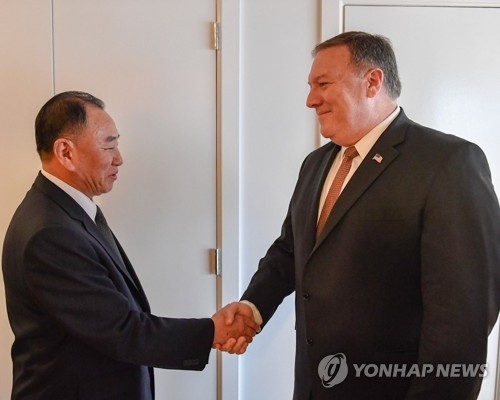 "We've made real progress in the last 72 hours toward setting the conditions," the secretary of state said. "The conditions are putting President Trump and Chairman Kim Jong-un in a place where we think there could be real progress made by the two of them meeting."

Trump said hours earlier that he is hopeful the summit will take place June 12, but that he wants it to be "very meaningful." There could be more than one meeting and there could also be none.

The North Korean delegation in New York, led by Kim Yong-chol, vice chairman of the ruling Workers' Party's Central Committee, will travel to Washington to deliver a personal letter from Kim Jong-un to Trump on Friday.

The U.S. president said he looks forward to seeing "what's in the letter" and thinks it will be "very positive."

Pompeo declined to provide details of what any denuclearization agreement with the North would look like. Still, he said the North Koreans appear to be "contemplating a path forward where they can make a strategic shift, one that their country has not been prepared to make before."

"There will be tough moments, there will be difficult times," the secretary of state said, noting that the nuclear issue is a decades-old challenge. "I've had some difficult conversations with them as well. They've given it right back to me, too."

Speaking of the challenges to come, he said, "Our mission is to bridge them so that we can achieve this historic outcome." 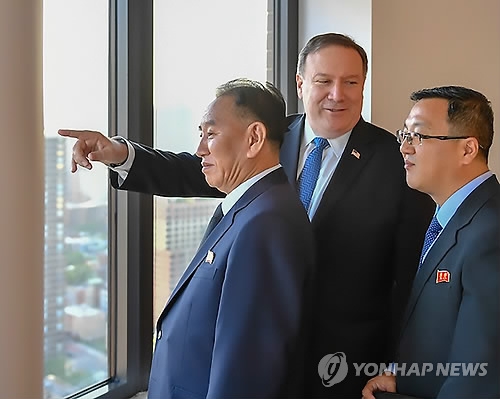 "Make no mistake about it. President Trump, this administration completely understands how hard this problem is," Pompeo said. "There is a long history where North Korea has viewed its nuclear program as providing the security that it needed for the regime."

The task at hand is to convince the North Koreans that a bright future lies ahead and their security will be greater by giving up "all elements" of its nuclear program.

"Many conversations have been had about how we might proceed, what the path might be forward so that we can achieve both the denuclearization that the world demands of North Korea and the security assurances that would be required for them to allow us to achieve that," Pompeo said.

In terms of coordinating policy with South Korea and Japan, key U.S. allies in Asia, the secretary said there is "no daylight" between them.

"We understand their concerns. We understand the risks that can be posed to them. And an agreement that we reach will provide an outcome that each of those countries can sign on to as well," he said. 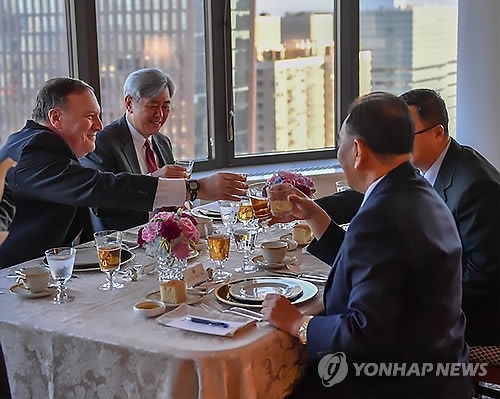 Trump hosted South Korean President Moon Jae-in at the White House last week. Moon, who has engineered the expected U.S.-North Korea summit, has held two summits with Kim since April to push for "complete denuclearization" and a formal end to the 1950-53 Korean War that ended in an armistice, not a peace treaty, leaving the two sides technically at war.

"The proposed summit offers a historic opening for President Trump and Chairman Kim to boldly lead the United States and the DPRK into an era of peace, prosperity and security," Pompeo said, using an acronym for the North's formal name, the Democratic People's Republic of Korea.

It would be "nothing short of tragic to let this opportunity go to waste," he said. It would also take "bold leadership" from Kim, something both he and Trump believe the young leader has.

In the coming weeks and months, "we will have the opportunity to test whether or not this is the case," Pompeo said.