"To meet the annual 3 percent growth target for 2018, we need some 0.82-0.88 percent growth in each of the remaining quarters," Kim Young-tai, director of the national accounts division at the BOK, said. "The economy seems to be pulling off steady growth in economic data that came in for April and May."

Later in the morning, latest customs data showed that South Korea's exports spiked 13.5 percent in May from a year earlier, rebounding from a brief 1.5 percent dip in the previous month. 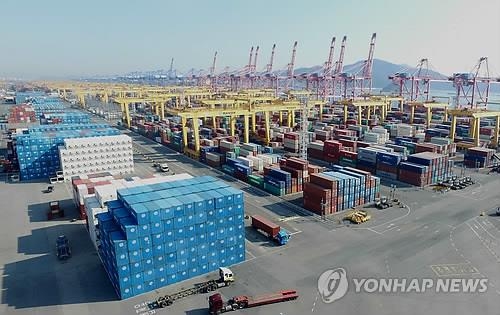 Exports, which account for around 50 percent of the GDP, rose 4.4 percent on-quarter, rebounding from a 5.3 percent drop in the fourth quarter, while growth in imports also turned around to 4.9 percent.

By production, the central bank said the manufacturing industry climbed 1.6 percent in the first quarter, while the construction sector grew 2.1 percent.

Services expanded by a nearly five-year high of 1.1 percent in the January-March period on booming real estate services.

But food and accommodation businesses fell 2.8 percent in the first quarter as they were directly hit by the Seoul-Beijing diplomatic row over Seoul's deployment of the U.S. missile defense system THAAD.

The Chinese government imposed a ban on group tour packages heading to the neighboring country from March last year.

The two sides agreed to normalize the bilateral relationship in November last year, but the Chinese retaliation weighed heavily on South Korean restaurants and hotels up till March.

"An increasing number of Chinese tourists are coming to Korea since March. But in the first quarter, the food and hotel sector struggled with still less visitors," said Kim, the BOK official. "At the same time, prices of vegetables were high in the spring season and people stayed indoors to keep away from the chronic fine dust."

Meanwhile, the BOK said the country's real gross national income moved up 1.3 percent in the three-month period from a quarter earlier thanks to improving terms of trade.

The gross savings ratio reached 34.9 percent last year, hitting the lowest quarterly percentage since the fourth quarter of 2015, while the country's gross domestic investment ratio edged down to 31.4 percent.