SEOUL, June 1 (Yonhap) -- Samsung Electronics was able to grab a bigger share of the domestic market in the first quarter from an early release of its new flagship Galaxy S9 smartphone line, according to market surveyor Strategy Analytics on Friday.

Samsung shipped 3.9 million units of its smartphones in the quarter ending in March, accounting for 65.3 percent of the local market. U.S. rival Apple came next with 16.7 percent (1 million units), followed by domestic competitor LG Electronics with 12.2 percent (700,000 units), according to the provided data.

The figures compare with 58.2 percent for Samsung in the first quarter last year, 18.2 percent for Apple and 14.9 percent for LG. In the fourth quarter, Samsung's portion of the domestic market fell to 46 percent, while that of Apple reached 28.3 percent from the launch of the iPhone X and the iPhone 8. LG's share for the quarter was 15.7 percent.

The bigger share for Samsung in the latest quarter was attributed to the early release of the Galaxy S9 series on March 16, which sold more than 1 million units in just about 60 days.

Data said the global smartphone market in the January-March period this year shrank 2 percent compared with the same period last year, while the local market expanded approximately 9 percent for a shipment increase from 5.5 million units last year to 6 million units this year. 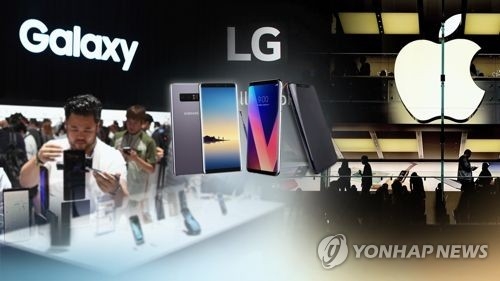