Under the special counsel bill that passed through the National Assembly last week, Moon has until Friday to make the candidate recommendation request. Once the request is made, the Korean Bar Association will suggest four candidates before three opposition parties recommend two of them to Moon.

Kim said he expects to receive a list of two opposition-recommended candidates by June 7 and Moon is supposed to select one of them as a special prosecutor within three days.

"We moved up the schedule by one day in order to give opposition parties more time for discussions," an official of the association said.

The scandal centers on suspicions that the power blogger, known by his nickname Druking, and his team manipulated comments on Internet news stories in an effort to sway public opinion on hot-button political issues.

Druking was found to have relations with officials of the ruling party and the presidential office. He has claimed that former ruling party lawmaker Kim Kyoung-soo, a key aide to Moon, tacitly agreed to his campaign for the online opinion rigging.

Kim has flatly denied the allegations, dismissing them as "fiction." 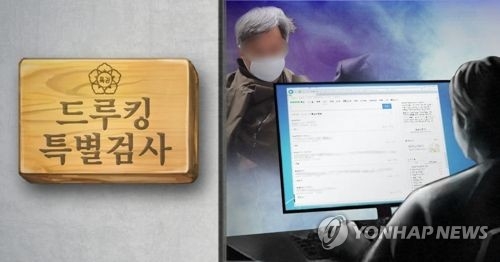