SEOUL, June 1 (Yonhap) -- The renaming of the U.S. Pacific Command does not alter the missions of any commander under the combatant unit, a U.S. military official said Friday, amid speculation that the name change reflects Washington's resolve to keep an assertive China in check.

U.S. Secretary of Defense James Mattis announced Wednesday that the Hawaii-headquartered command has been renamed the Indo-Pacific Command "in recognition of the increasing connectivity (of) the Indian and Pacific Oceans."

The renaming came as China has been seen striving to project its maritime power far beyond its borders by building up its navy and constructing artificial islands in the disputed South China Sea capable of hosting military forces.

"The term 'Indo-Pacific' reflects the strategic importance of both the Indian and Pacific Oceans," CDR Dave Benham, director of media operations at the U.S. Indo-Pacific Command, said in an email message to Yonhap News Agency.

Benham was responding to Yonhap's question of whether the renamed command will have a new vision for the U.S. Forces Korea subordinate to it, which has focused on deterring North Korea's aggression rather than undertaking a wider range of missions beyond the Korean Peninsula.

Amid an inter-Korean detente and China's growing assertiveness in the East and South China Seas, analysts have said the U.S. military would feel the growing need to expand the USFK role to include tasks such as protecting a regional "rule-based" maritime order.

Based on its growing economic and military might, China has been suspected of seeking to expand its sphere of influence through man-made islands in the strategically vital waterway of the South China Sea -- or farther into the Pacific.

The United States apparently sees the move as a threat to the global commons, or the freedom of maritime navigation or commerce, which has led it to carry out naval operations to keep the contested waterway "free and open."

Beijing has also been pushing for the "One Belt One Road" initiative, seen as a grand geopolitical strategy to connect China with Southeast Asia, Central Asia, Europe and even Africa through "land and maritime silk roads."

During Wednesday's change of command ceremony at the Indo-Pacific Command, the Pentagon chief indicated America's resolve to fend off any threat to the global commons in an apparent allusion to China's maritime ambitions.

"For every state, sovereignty is respected, no matter its size, and it's a region open to investment and free, fair and reciprocal trade not bound by any nation's predatory economics or threat of coercion, for the Indo-Pacific has many belts and many roads," Mattis said.

"America continues to invest vigorously in Indo-Pacific stability, bolstering the free and open rules-based international order that has enabled this region to grow and to thrive for over 70 years," he added. 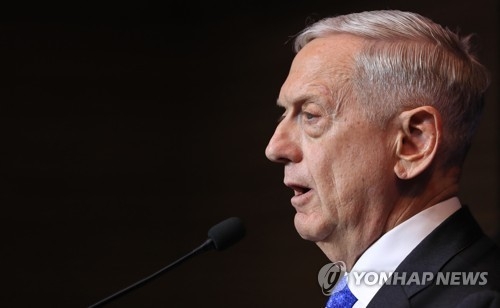