Labor leaders strongly object to the legislation, which passed through the National Assembly on Monday, as it calls for newly counting some regular bonuses and welfare allowances when calculating minimum wage. The inclusion offsets the effect of a rise in the minimum wage.

South Korea raised the hourly minimum wage by 16.4 percent to 7,530 won in January, the biggest hike in nearly two decades, and plans to increase the threshold to 10,000 won by 2020. Counting bonuses and other benefits in minimum wage calculations was one of the demands from businesses.

The KCTU demanded that Moon exercise his veto rights to scrap the bill.

"We make this demand to President Moon Jae-in," it said in a statement. "Accept people's voice and exercise the veto right."

It also demanded a meeting with Moon.

The labor group plans to continue the protest rally in front of Cheong Wa Dae through June 9. It also plans to launch a nationwide campaign to collect one million signatures calling for scrapping the legislation and holding a large-scale protest rally on June 30. 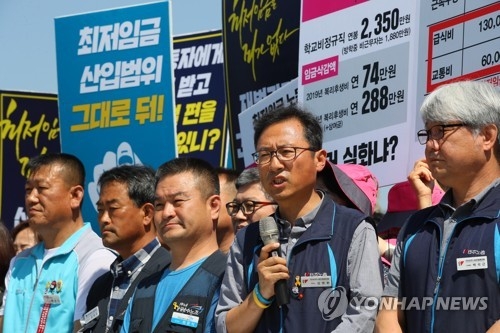