IKI ISLAND, Japan, June 1 (Yonhap) -- About 2,770 sets of remains belonging to Korean people forcibly brought to Japan to work for its factories and military during World War II have yet to be repatriated home, South Korean government officials said Friday.

Japan ruled the Korean Peninsula from 1910 to 1945, a time during which historians say millions of Koreans were mobilized into forced labor.

The remains have been retrieved and kept in 340 temples or cineraria across the neighboring country -- 480 in the Hokkaido and Tohoku region, 560 in the Kanto region, 200 in the Kinki region, 570 in the Chubu region, 220 in the Chugoku and Shigoku region and 740 in the Kyushu and Okinawa region -- South Korea's interior ministry said, citing data from the Japanese government.

South Korea and Japan agreed to launch a joint project to return remains of the victims of forced labor after a 2004 summit between President Roh Moo-hyun and Prime Minister Junichiro Koizumi.

Following the agreement, 423 sets of remains kept in Yuten Temple in Tokyo's Meguro Ward were sent to South Korea four times between 2008 and 2010. Negotiations between the two countries to implement the project were stalled by a diplomatic chill in the wake of South Korean President Lee Myung-bak's visit to the country's easternmost islets of Dokdo in 2012.

The 423 sets of remains belonged to Koreans who worked for the Japanese military as soldiers or civilian workers and included none of those who were victims of Japan's forced labor.

While the governmental negotiations made little progress, civic bodies of the two countries made efforts to find the families of those remains and have them sent home. In 2015, South Korean and Japanese civic bodies managed to return 115 sets of remains of Korean people who died after being forcibly brought to Japan's northernmost island of Hokkaido.

On Thursday, Japanese monks conducted a Buddhist ritual at Tentoku Temple on Iki Island off the southwestern main island of Kyushu, near South Korea, after enshrining the remains of 131 Koreans who were forcibly taken to Japan to work for Mitsubishi during Japanese colonial rule and died while returning home aboard an outdated ship that was sunk by a typhoon in September 1945. The ship carried 246 Koreans, all of whom went missing. The remains were found at Konjoin Temple in Japan's Saitama Prefecture in a probe by South Korea's truth-finding commission on forced laborers that began in 2005. 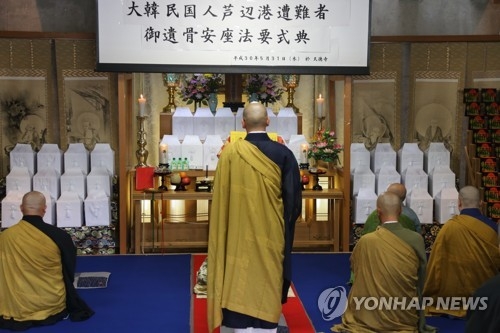 The two countries have another project to collect the remains of Korean War dead and civilian workers killed in the war and repatriate them to their homeland.

According to South Korean and Japanese civic bodies, 22,000 sets of remains belonging to dead Korean soldiers and workers are believed to be still buried in the major battlefields of World War II, including southern Okinawa, the South Pacific and Southeast Asia.

In March 2016, Japan enacted a law aimed at implementing a project to collect the remains of Japanese war dead. The project called for conducting DNA tests on remains believed to be those of Japanese soldiers killed in the war, but soldiers from the peninsula are not subject to it.

Passing the buck to South Korea, Japan has taken a lukewarm stance that the two separate projects of returning the remains kept in temples and cineraria and collecting and conducing DNA tests on buried remains of Korean people are possible only after the South Korean government makes an official request for them.

The South Korean government has had working-level contacts with the Japanese government on the issue. But it has yet to make an official request to have the remains repatriated and the buried ones collected, enabling Tokyo to make an excuse not to come up with measures to implement the projects.

Seoul and Tokyo agreed to discuss the issue during a meeting of their foreign ministers in December last year. But the negotiations have shown signs of acceleration, government officials said.