The SNU students, who recently launched a promotion committee for inter-Korean exchanges together with the university's student council, filed the request with the South Korean ministry on May 24 and are waiting for an official reply, they said.

The SNU committee will send a fax message to the Pyongyang-based Kim Il Sung University to begin discussions on student exchanges, if the Seoul government approves its contact with North Koreans, they added. 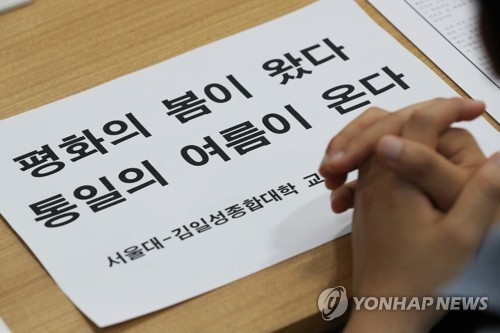 "SNU students will push to visit Kim Il Sung University and look for various exchange programs, including joint exploration of historical sites in Pyongyang by students from both universities," said a spokesperson for the committee.

The SNU itself has also pushed for exchanges with the North's top university through indirect channels, though there has not been any clear progress.

"There have been some suggestions for school-level exchanges with Kim Il Sung University, particularly following the recent inter-Korean summit talks. The message was delivered via foreign universities with ties to the North's university," said an SNU official.

"In a reply, Kim Il Sung University proposed both parties observe the situation for the time being. There have been no concrete discussions on exchanges," the official said.

SNU President Sung Nak-in reportedly met with his counterpart from Kim Il Sung University, Thae Hyong-chol, on the sidelines of a ceremony marking the 120th anniversary of Peking University in Beijing on May 4 and 5.