The Gwangju city government seeks to establish a vehicle production JV to generate jobs and help support the local economy. The city proposed tax benefits to investors such as a 75 percent reduction in acquisition taxes and another 75 percent cut in income taxes for the first five years, Hyundai Motor said in a statement.

"The company sent a letter of intent to the Gwangju municipality to see if it makes sense to join as a strategic investor in the JV project. If Hyundai becomes part of the JV, the carmaker can have the JV produce its vehicles under an original equipment manufacturing contract," a company spokesman said over the phone.

As labor costs grow higher at its domestic plants, Hyundai Motor is looking at the original equipment manufacturing (OEM) option to cut costs, he said.

But the vehicles produced at Hyundai's plants cannot be transferred for production to another plant without approval from the union. Given this, only a new model can be produced at the OEM plant, the spokesman said.

Hyundai's 5-member union objected to the plan on the basis that the carmaker has extra production capacity.

The combined output capacity of Hyundai and its affiliate Kia Motors Corp. is 9.68 million vehicles and they sold a total of 7.35 million autos in global markets last year. The company has ample leeway to assemble vehicles in their own plants, the union said in a statement.

Hyundai will decide on whether to invest in the JV after consulting with Gwangju city officials and other potential investors over the project's validity, the statement said.

The Gwangju City plans to receive further letters of intent from other carmakers to push forward the OEM plant project and complete the basic infrastructure for a 2.48 million-square-meter industrial complex by 2019, Kim Seon-ja in charge of automobile matters in the city government said.

"The car-manufacturing plant could be built in the complex if Hyundai and other investors form a joint business partnership," she said. 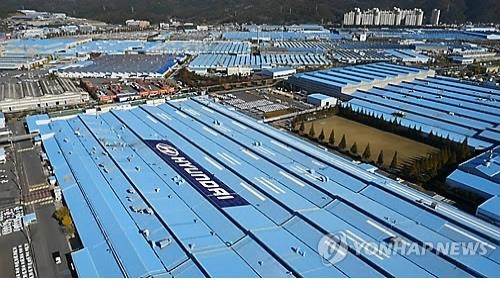