An internal Supreme Court probe revealed that the National Court Administration under the top court wrote a report in March 2015 on how to take advantage of high-profile cases in persuading senior presidential aides into supporting then-Chief Justice Yang's plan to establish a court of appeals.

The agency's officials allegedly communicated frequently with then-President Park Geun-hye's aides and influential politicians over cases, such as those involving an opposition lawmaker, a former spy chief and the progressive teachers' union.

"While serving as chief justice at the Supreme Court, I never unfairly interfered with trials and used trials for bargaining," Yang told reporters near his home in Seongnam, south of Seoul.

Yang also said no disadvantage was given to judges who opposed his proposal to set up a court of appeals.

"How can a person, who lived as a judge for 45 years while upholding the principle of independent trials as a golden rule, interfere with trials?" he said. "Trials are not subject to bargaining, and it is unimaginable to use them for a deal."

Current Supreme Court Chief Kim Meong-su apologized to the nation over the allegations Thursday. Kim also said he would consider taking action to criminally punish those involved in the wrongdoing, suggesting judges could undergo prosecution investigation, possibly including Yang.

Yang made clear he's not going to undergo questioning by the Supreme Court investigation team. 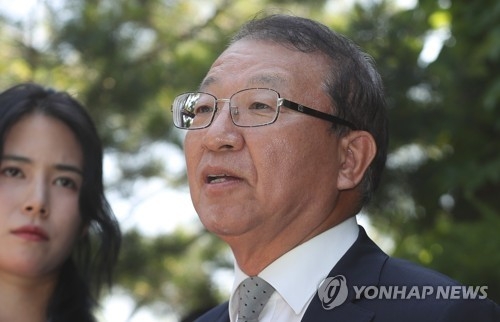