According to Gallup Korea's survey of 1,002 adults nationwide between Tuesday and Thursday, the favorability rate of Trump rose 8 percentage points from March to reach 32 percent.

In the same period, the ratio of South Koreans who view Kim favorably also surged from 10 percent to 31 percent, the poll showed, which has a margin of error of 3.1 percentage points and a 95 percent confidence level. 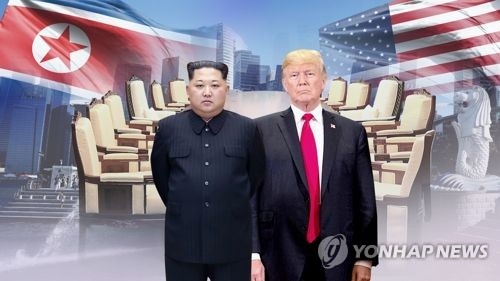 Gallup said senior citizens were more favorable toward Trump, with 53 percent of the supporters of the main opposition Liberty Korea Party and 44 percent of conservatives endorsing the U.S. president.

In case of the North's leader, 40 percent of South Koreans in their 40s and 50s expressed favorability for him, whereas only 16 percent of those in their 20s liked him, the pollster noted.

Among the supporters of the ruling Democratic Party, the favorability rating of Kim exceeded 40 percent, while only 20 percent of the supporters of opposition parties and nonpartisans expressed such a feeling.

"The favorability rating of Kim Jong-un is expected to change depending on how the North implements inter-Korean summit agreements and the outcomes of the North Korea-U.S. summit," a Gallup official said.