SINGAPORE, June 1 (Yonhap) -- A team of North Korean officials visited a luxury Singapore hotel Friday afternoon, apparently seeking to determine whether leader Kim Jong-un will stay there when he travels here for a summit with U.S. President Donald Trump.

The departure of the delegation, led by Kim Chang-son, known as the de-facto chief of staff to the leader, by a car was spotted at around 3:30 p.m. by reporters who staked out roads near the Fullerton Hotel, where it's staying.

The North Koreans headed to the St. Regis hotel downtown, raising speculation that it has emerged as a possible site for the North's leader to stay.

The hotel has the only one entrance, which means relatively good conditions for security. In 2015, then South Korean President Park Geun-hye stayed there.

It's also close to the Shangri-La Hotel, a candidate to play host to the unprecedented summit between the U.S. and North. It was the venue for the 2016 meeting between Chinese President Xi Jinping and his Taiwanese counterpart Ma Ying-jeou.

Also near the hotel is the Istana, the official residence and office of the Singaporean president, which may be picked as the summit location.

The North's delegation arrived in the city state Monday and had a few rounds of meetings with the U.S. delegation headed by White House Deputy Chief of Staff Joe Hagin at the Capella Hotel on Sentosa.

The narrow road to the compound, the temporary home to the U.S. officials, remained blocked by security guards. A security official cited an "important private event" there.

The two sides are in Singapore apparently to discuss the logistical details of the summit talks between the North's leader Kim Jong-un and U.S. President Donald Trump that will likely take place in Singapore later this month. 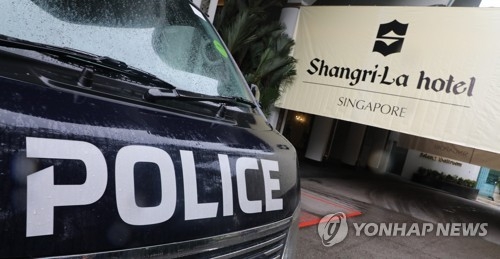 Police, armed with rifles and pistols, set up roadblocks and stringent security checks around the hotel.

A South Korean resident in Singapore said, "Many think it's natural that the Shangri-La Hotel will become the venue. Singapore is a globally hot tourist spot. Taking security and safety measures is not an easy matter for other major hotels. In that sense, Shangri-La is a good place."

If North Korea and the U.S. have the Shangri-La in mind, the three-day security forum to last through Sunday at the hotel can be a last-minute test of security conditions.

A local taxi driver said: "I know about the talk of the U.S.-North Korea summit in Singapore. I am a bit worried about the possibility of a terrorist attack in Singapore because of it."